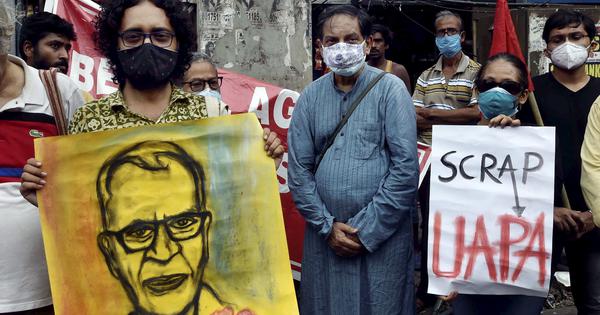 The excruciating slow-motion and detained murder of Father Stan Swamy, 84, a Jesuit priest who spent decades of his life serving the dispossessed of India, took place in the window of our democracy. Our justice system, our police, our intelligence services and our prison system are accountable. Our mainstream media too. They were all aware of the affair and of his failing health. And yet he continued to be crushed.

This gentle, frail but formidable man has died as a co-accused, one of 16, in what the state calls the Bhima Koregaon conspiracy. Forensic analysis of computer hard drives reported by the Washington post has revealed that the prize evidence that allows agencies to tell the story of a conspiracy was planted by malware into the computer of Rona Wilson, one of the co-accused. This report has been buried by mainstream Indian media as well as the courts.

Tuesday, one day after Father Stan’s death, the To post reports that a second co-accused, Surendra Gadling, also had evidence in his computer. But we have a law, the Illegal Activities (Prevention) Act, which allows our government to keep incarcerating the defendants – the best Indian lawyers, intellectuals and activists – almost indefinitely, until they die of bad blood. health or their lives destroyed by years in prison.

UAPA is not being misused. It was written exactly for that.

The slow murder of Father Stan Swamy is a microcosm of the not-so-slow murder of anything that allows us to call ourselves a democracy. We are ruled by demons. They put a curse on this earth.