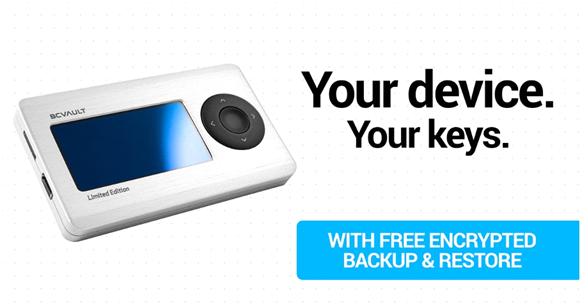 Cardano investors who hold their ADA tokens on the network have a stake in the overall network which is proportional to the number of tokens held. When the owner delegates the tokens to a staking pool, they are participate in the security and governance of the Cardano Proof-of-Stake (PoS) blockchain network by validating new blocks and processing transactions.

In exchange for your contribution to the network, the the owner will receive a staking reward or a return on their investment. This process is called a Staking Cardano and is a similar concept to mining and lending cryptocurrency to earn free crypto.

Since 2012, at least 46 Bitcoin exchanges lost funds due to a major cybersecurity breach that cumulatively amounts to nearly US $ 2.58 billion stolen. The most common form of hacking involved infiltrating the PRIVATE KEY to the hot wallet of the exchange, because until today the most and the best method to store cryptocurrency assets is still to use a personal account hardware wallet.

BC Vault is a hardware wallet that until today has ZERO. The staking feature has been specially designed for Cardano staking which is suitable for both beginners and experienced users who want to delegate their coins. The BC Vault app can be downloaded and installed with one click on Windows, Linux and MacOS. Once installed, the app can be used to send and receive ADA tokens and to delegate funds to a staking pool.

The BC Vault offers users the ability to browse a list of staking pools that can be filtered / sorted by name, margin, saturation, and costs to stake. 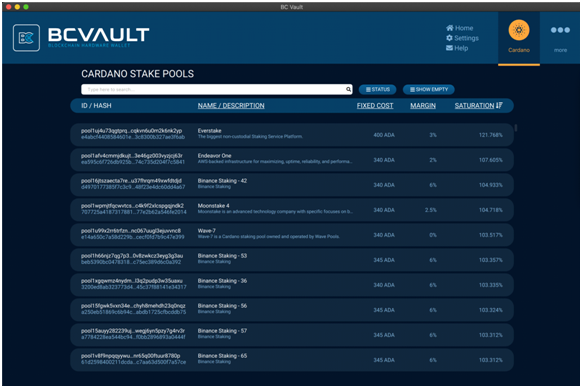 Cardano’s staking rules impose a 20-day grace period for delegated coins to be approved over the network to avoid overloading. After this period, the coins will start accumulating rewards which will be paid out every 5 days, minus the wagering fee.

Unlike a traditional cryptocurrency exchange, the private keys that give access to funds are not kept on a server hosted by third parties or the exchange. Users retain full custody of their Cardano private keys which are stored on the BC Vault. Therefore, Cardano token holders who bet using the BC Vault crypto wallet are immune to cryptocurrency exchange attacks / hacks.

What is BC Vault?

The idea behind this new stronger hardware crypto wallet was from the start to give the user a reliable, fully functional and independent device that does not look like a cheap USB stick with only basic functionality and with user operation. unreliable and difficult.

We developed a strategy and vision for BC Vault that started with a question: â€œWhat incredible benefits can we bring to the customer? ” and not to begin with – let’s sit down with the engineers and figure out what great technology we have and how we’re going to bring it to market.

We didn’t want to be another clone of the early open source hardware wallets, or a solution that would make it complicated and time consuming to use. When we analyzed the market and tested the existing products, we found that the current products on the market are difficult to use and clunky, do not offer some critical features, they rely on specific browsers to function and use deterministic portfolios. interconnected. Some of them don’t even have a screen and if they do, they use small, inconvenient and hard to read (and expensive!) Screens. Current products have very inconvenient desktop software for normal use, and many use an old method of backing up data. As a company that has worked in the IT security industry for over 20 years, we have successfully managed the most critical projects for the financial sector, the telecommunications environment and government infrastructure. We understand and know how to manage the most demanding projects in terms of protecting and securing valuable data. We used all of this experience and knowledge to design and produce the BC VAULT, a product or better to say a complete solution for the blockchain industry and regular users.

To prove our confidence, we have preloaded each device with a 1.0 BTC bounty wallet. Each BC Vault comes pre-loaded with a bounty wallet, encrypted in the same way as any other user-created wallet on the device. This wallet contains 1.0 BTC. “If you break the encryption of the bounty wallet, it’s your turn to take it!” Â»Explains Renato Uhl, CEO of BC Vault and co-owner of REAL security doo

BC VAULT does not require a browser to function like other solutions. We know that some users are wary of the security implications of their primary browser-based cryptographic interface, so we’ve taken a native approach. We support the Unified API for all platforms (such as exchanges, payment processors), making it easier than ever to integrate secure payment processing and fraud prevention into your service. 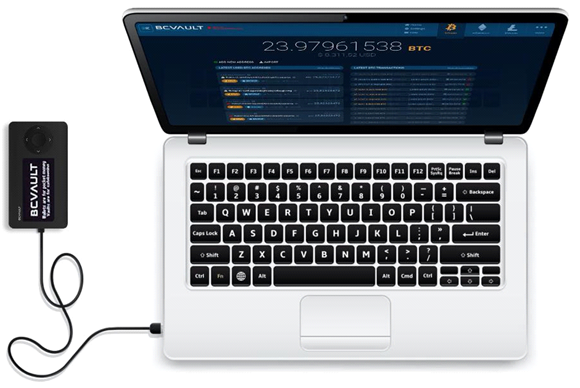 BC VAULT gives you the ability to store over 2000 unique wallets, each encrypted with a different access code.

At the start of development, we considered using deterministic portfolios, but the idea was rejected for a multitude of reasons. We have chosen not to use deterministic portfolios as Ledger and TREZOR do for example, because public keys are mathematically linked and can be assigned to a user. If a malicious actor steals your save, they have access to ALL CURRENT and FUTURE wallets created on that device. It is difficult for developers and users to go through a non-trivial account discovery process every time the user wants to do something. Based on this fact, we have decided to forgo the deterministic hierarchical wallet generation in favor of independently and anonymously encrypted private keys. Not as eye-catching, but it has some important advantages for users, such as very easy to use for normal user, easy for services to implement direct support (just public key, no account discovery), each wallet can be individually encrypted, full backups can be easily encrypted, wallets can be named, wallets can be deleted and are not traceable to a single source.

We have divided the users into two groups: advanced users and novices. Our goal from the start was to create a product that appeals to both types of users. We’ve made it as easy as possible for newbies, but we’ve kept the advanced features we know that users more familiar with crypto research look for. Everything had to be intuitive and behave like an average user would expect. We worked with experienced designers to create a beautiful GUI that is also incredibly functional and practical.

â€œOne of the first major obstacles was the one we encountered while testing existing devices like TREZOR, LEDGERâ€¦ which use flash memory (still today). We found a problem with testing huge amounts of different wallets. Not only was the flash impractical from a hardware point of view (block control only among other things), but it also stopped working after a certain threshold of write operations. This would dramatically shorten the lifespan of BC Vault, so we went with the latest technology – Ferroelectric RAM (FeRAM). This provided us with several advantages from a material point of view. This gave our hardware experts better control over device storage and allowed us to deliver incredible value to the customer.

BC Vault features are best explained by Crypto Casey review at: https://youtu.be/TBhy4nb5hQA

Due to the use of the FeRAM BC Vault is unique in that the device itself can be stored almost indefinitely, that is, in a safe, without any data loss by power off, over 200 years at 35 Â° C or 10 years at 85 Â° C (although we really do not recommend storing it in a hot place!)! This gives you longer term storage than Flash, hard drives, SSDs, floppy disks, and magnetic tapes, all for free! Your funds are stored offline in a cold room to prevent cyber attacks. We use state of the art encryption measures to ensure that your private keys are secure. Private keys are encrypted and stored in FeRAM for incredible durability and reliability. This means that, if you wish, you can leave your BC VAULT in a safe for decades and (assuming there is no external damage) your private keys would be intact. FeRAM is a (Ferroelectric Random Access Memory) chip using ferroelectric process and silicon gate CMOS process technologies to form the nonvolatile memory cells.). 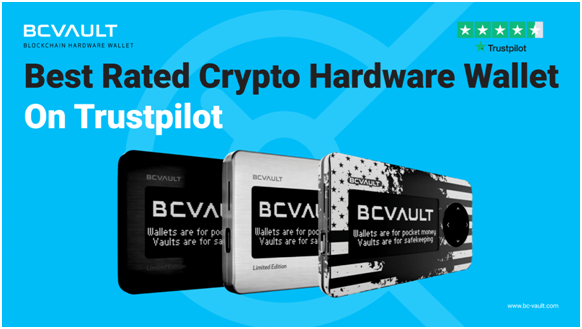 FeRAM can retain data without using a backup battery, as required for SRAM. The memory cells used in FeRAM can be used for 10 ^ 13 read / write operations per byte, which is a significant improvement over the number of read and write operations supported by Flash memory and E2PROM. FeRAM does not take long to write data like Flash memory or E2PROM. FeRAM can write data at high bandwidth without any waiting.

Your backups are also protected. Even if someone were to steal your backups, they should know your PINs and passwords to unlock them. This is in stark contrast to BIP44 / 38 based hardware wallets which do not encrypt their backups. BC Vault is the first commercially available multi-crypto hardware wallet offering SECURE ENCRYPTED SAFEGUARDS. “Add to this wallet encryption and you can be sure your wallets will be safe!” Â»Says Alen Å alamun, CTO and co-owner of REAL security doo

We believe this is a real path and customers all over the world are already responding with comments, posts and ratings as in the case of TRUSTED PILOT: https://www.trustpilot.com/review/bc-vault.com where BC Vault has the highest score – Excellent among all hardware wallets on the market based on user experience and feedback.

For more information on the BC VAULT, please visit: www.bc-vault.com