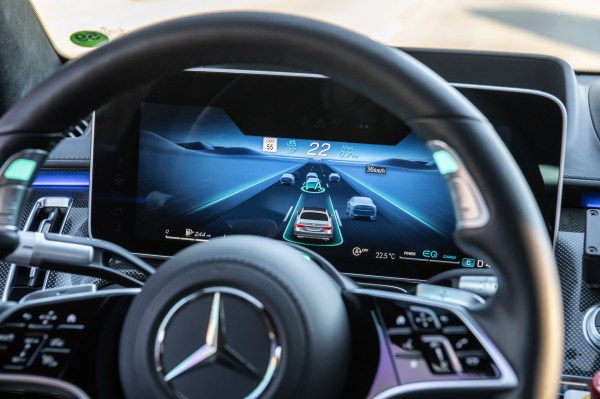 I’m sitting in the passenger seat of a special Mercedes Benz S-Class on a blinding California spring day, casually watching an autonomous delivery robot cross a crosswalk on its way to deliver someone’s take-out meal in Santa Monica. The test driver next to me laughs as we’re about to hit the highway for a demonstration of Mercedes’ Drive Pilot, a Level 3 conditional automated driving system that consumers may be able to order from by the end of this year.

Mercedes aims to be the first automaker to offer Level 3 legal automated driving to the general public off the test track in its full-size luxury S-Class vehicles. The question is whether that should be the case, especially given the Everest-sized challenges that lie ahead, even if the economic opportunities include grabbing a chunk of the estimated self-driving market $220.4 billion.

The stakes are also high. The Mercedes Level 3 system must handle multiple tasks at once, including recording and exchanging large amounts of data and giving enough time and warnings for the human driver to regain control when something goes wrong . There are the legal risks that Mercedes has agreed to take when the system is activated, and there are even geopolitical risks: Mercedes uses the Russian GLONASS system for its global positioning information in Germany, for example.

And yet, Mercedes is moving forward despite the risks, because the opportunity is simply too vast to ignore. While other automakers like Tesla claim to have fully autonomous driving systems, Mercedes is the first to clear the required legal hurdles in the United States and Germany to bring the conditional system to consumers. Although the timeline is a bit hazy as Mercedes is still working on those legal requirements, the system could be in the hands of consumers and their driveways as early as mid-2023.

In the trunk of one of the four development vehicles parked in the garage of the Proper Hotel in Santa Monica, sits a huge chassis of computer components. Upon arrival, the trunk is open to let the components breathe, according to the test rider. There’s no room for your coveted golf bags or luggage here.

These components log, store, manage and download up to 2.87 GB of data per minute when the car is in normal operation. If an incident occurs while the vehicle is in motion, say, for example, someone cuts the development vehicle into traffic and forces a panic stop, the system takes up to 33.73 gigabytes of data so that engineers can take a closer look at what happened and improve the system.

Customers who own S-Class vehicles equipped with the Drive Pilot system will not have to deal with computer components that hog trunk space. Instead, the vehicle will always be present in cars so that the Tier 3 system works and can process and store large amounts of data. Some of this data will be kept on board, while much of it will be uploaded to a secure cloud system.

This data all comes from a variety of sensors around the vehicle, a few of which will be new to future S-Class vehicles that have been ordered with the new Drive Pilot system. While the company didn’t disclose specific costs for the system, reps said it would cost as much as their high-end Burmester sound system. This sound system on the S-Class is a $6,700 option on its own, but requires the addition of a separate $3,800 package, bringing the approximate total to around $10,500. That approximates the cost of Tesla’s “Full-Self Driving” system, which is currently a $12,000 option.

The Level 3 Conditional Drive Pilot system is based on the hardware and software used by Mercedes’ Level 2 ADAS system known as Distronic. It adds a handful of additional advanced sensors along with software to support the features. Key hardware systems that will be added to future S-Class vehicles configured with the Drive Pilot upgrade include an advanced LiDAR system developed by Valeo SA, a moisture sensor in the wheel arch to determine wetness on the road, rear-facing cameras and microphones to detect emergency vehicles and a special antenna array located at the rear of the sunroof to aid in precise GPS location.

The Valeo LiDAR system is more advanced than that of the current generation S-Class, in that it scans at a speed of 25 times per second at a distance of 200 meters (about 650 feet and more). This is the second generation of the system, according to Valeo’s spokesperson at the event. The system sends out lasers which then create points in space to help the AI ​​classify the type of object in and around the vehicle’s path, whether human, animal , a vehicle, a tree or a building. From there, the AI ​​uses data from other sensors around the car, to determine over 400 different projected paths for itself and potential paths for vehicles, pedestrians and motorcyclists around it, and choose the safest route.

The moisture sensor is a small, round audio sensor located behind the front driver’s wheel arch and it determines how wet the road surface is. When the road is wet, droplets are thrown onto it, creating an audible crackle. When the system “hears” this crackle, Drive Pilot will be deactivated and the human in the driver’s seat will have to take over.

The S-Class’ rooftop antenna array uses a variety of different satellites to pinpoint the vehicle’s exact location to within centimeters. It is accurate enough to recognize which lane the vehicle is in on the highway. Mercedes says it relies on Galileo, GPS in the United States and Russia’s GLONASS system for this positioning information in Germany. These precise GPS points are integrated into an HD map which then helps the system navigate in the real world.

These sensors are in addition to those already present in the Distronic system, which includes interior cameras to ensure that the driver is attentive, as well as radar, ultrasonic and 3D cameras on the outside. The additional hardware is there to ensure that each system is redundant and provides a more accurate view of the interior and exterior of the vehicle as the system navigates the environment and, unlike the Tesla system, ensures that the driver is actually attentive and not sleeping or watching a movie while operating the system.

There is a reason for all this precise and specialized equipment. Mercedes-Benz assumes responsibility, including liability, for the safe operation of the system. The legal ramifications could be immense if something goes wrong and crashes while the system is being used by a consumer.

Mercedes has used vehicles like this to test its Drive Pilot on more than 50,000 miles of roads in California and Nevada, where the company currently has conditional licenses to operate the system.

Once the legal hurdles are cleared, which Mercedes says should happen by the end of the year, the systems will be available on properly equipped S-Class vehicles, when driven under specific conditions. However, this will remain limited.

The system will only be available in states where it is legal (California, Nevada, and Florida currently). Cross the border into, say, Arizona or Utah with an S-Class equipped with Drive Pilot, and the system won’t be available. It’s geo-fenced.

In addition to status location, the system will only engage if the vehicle is on clearly marked and divided interstates, freeways, or freeways leading into a traffic lane, not an exit lane . During our ride, the test driver moved to take an exit, and the system shut down and told him to take over as soon as he indicated he was changing lanes.

And even when all of these requirements are met, the system is only available up to speeds of 40 mph (60 km/h). 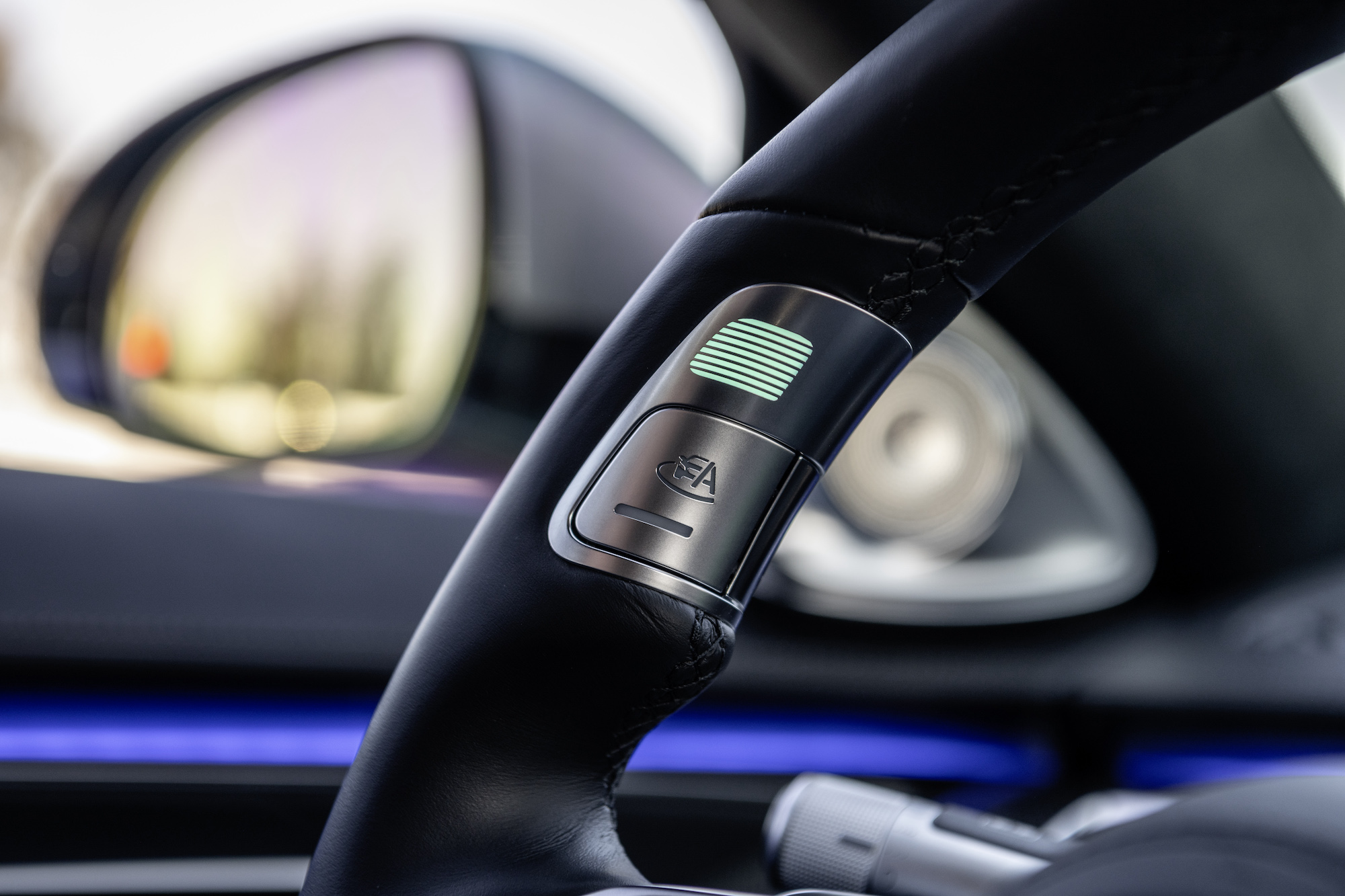 Inside, the vehicle looks almost identical to an S-Class with one key difference: on the steering wheel is a pair of buttons that fall directly below the driver’s thumbs. These buttons, engraved with the image of the front of a car with the letter “A” on top, are used to initiate the Level 3 system when external conditions are met. The lighting around the buttons and on the steering column turns white when the system is available, and green-blue when engaged.

Our short drive took us on the 10 freeway in Los Angeles towards downtown LA and back to Santa Monica. Traffic was heavy and intermittent, and there were many opportunities for the system to fail. During the first few minutes on the freeway, we encountered various road obstacles like plastic bags, cardboard boxes, and more of an unconscious Angeleno doing panic stops and randomly cutting into our lane of traffic.

During the short periods when the system was available when all conditions were met, its operation seemed flawless. The transfer was smooth and almost imperceptible. The driver activated the system, took his hands and feet off the controls and let the car drive itself, keeping his attention on the road ahead.

The system uses maximum following distance when engaged, so the gap was quite large between the S-Class and the car ahead. Surprisingly and unfortunately, no one decided to jump into this space while the system was activated, so we were unable to experience what might happen if a human suddenly changed lanes in front of the car while using the conditional system of level 3. . When the system lost necessary information, such as when the lane markers (sometimes called oreos) went low, an audible tone sounded and a message appeared for the driver to take over. At this point, the test driver would take control of the vehicle.

In total, the system was only engaged for maybe 10 minutes total during our 30-minute ride. Each engagement was relatively short as traffic accelerated to over 40 mph, or the system lost information needed to handle the ride. The very short ride didn’t give us enough time to evaluate the system, but it did give some insight into how Level 3 autonomy might work in the very near future. The real question, however, is how the system will perform in the hands of customers, and whether or not even the wealthy will buy the technology.

Filecoin (FIL) and GameFi Token (GAFI): what are these two?