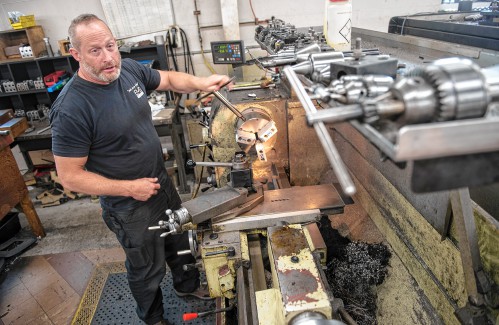 EASTHAMPTON – In the 2008 Marvel Comics superhero film ‘Iron Man,’ main character Tony Stark – an industrialist, weapons manufacturer and inventor – sits behind a futuristic computer, giving instructions to the computer as he creates for him a precision mechanical suit. of armour.

Most viewers are likely to marvel at the crisp graphics and the scene’s futuristic computer, capable of building a machine on its own. When local stagehand Chris Heon watches this scene, however, he has a different reaction.

“It’s just not realistic,” he said with a smile. Manufacturing machines still need people to operate them. And Heon would know.

For three decades, Heon worked as a machinist at Easthampton Machine & Tool Inc., one of many precision tool companies in the area. And in 2014, he and his wife, Laurie, bought the company and have run it ever since, mostly making parts for other manufacturers’ production lines.

“Everything we do is local,” he said.

Some days that means making the end of a robotic arm that a local manufacturer uses to pick up stamped discs on its production line, or part of the device that threads candle wicks for Yankee Candle. Other days the job is to make a prototype for someone who has an idea for a product – for example, the beekeeper they helped make a small heater for their hives.

Artists will also drop by to find specialty items that the company is able to manufacture.

“Their motto is, ‘We can do it’, is how Easthampton resident Alan Elman described the company on Facebook earlier this year. The center strut on the Elman 55 gallon aquarium broke in the middle of the night and the sides began to tilt. So he called Easthampton Machine & Tool, who quickly made him a metal bracket to hold the tank together, saving his living room and his fish.

“If you need a doohickey or a metal thing…call these amazing people and they’ll make it for you at a fair price,” Elman says.

Most of the company’s work is for fabricators who need a few parts and fast; maybe their essential machine has broken down and needs a quick fix. Easthampton Machine & Tool does not do large production runs. The company’s niche is to be prepared to do small runs for customers, most of whom they have worked with for decades.

Chris Heon is a graduate of Smith Vocational and Agricultural High School, and he and Laurie Heon are firm believers in vocational education. They said several current employees came to them as co-op students.

Easthampton Machine & Tool is located at 72 Parsons St. in the building that housed the Trytko Market 25 years ago. (The company has also done work for Trytko’s, they said.) And the Heons, married for 33 years, now live just down the street.

“We love Easthampton,” said Laurie Heon. That’s why the company does some of the “neighborhood work” that walk-ins bring them from time to time, even if it’s not profitable for the company.

The company’s bread and butter makes the precise and complicated parts that local manufacturers need, producing components that must be precise to the size of a strand of hair.

That’s what machinist Robert Lewis was doing inside the shop last week, using a machine known as a “toggle mill”, which was programmed to drill the exact hole he needed on a dye rack for a local manufacturing company.

“It’s a very complex process,” Lewis said, describing all the machinery the part would have to go through before it was exactly the size and shape it needed. He said he liked the job. “It’s doing things with my hands…I’m always creating something.”

Customer loyalty is important to Easthampton Machine & Tool. The Heons showed off their extensive inventory in a side room of their shop. They keep spares from past jobs for years and years, just in case a customer needs to redo the same job.

The company is also loyal to its machines, many of which have been in the workshop for decades. Chris Heon showed off several who have been with the company since he was a machinist there, describing how they take care of them to ensure they can keep working for years to come.

“I think there will always be a need for this kind of machine,” he said.

Those looking for quotes can visit the Easthampton Machine & Tool website.

Dusty Christensen can be contacted at [email protected]