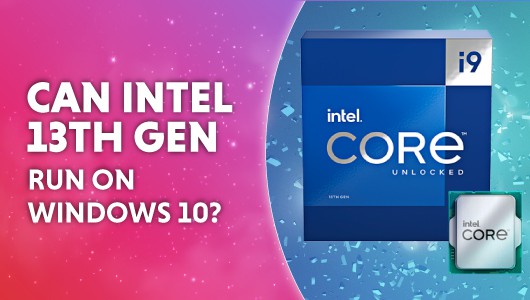 from Intel 13th generation processors are a big talking point these days among hardware enthusiasts, PC gamers, and reviewers. The all-new Raptor-Lake lineup was unveiled to us in September 2022. Currently, the launch lineup that includes Intel’s first two 13th Gen processors is available for consumer purchase.

Long story short, the performance gains are pretty impressive. In both gaming and productivity workloads, we see a huge performance boost. Sure enough, there are also valid concerns in terms of efficiency, thermal, and power consumption.

So, whenever a new platform or generation is released, there are bound to be issues right from the start. Some are more concerning than others. For example, some people ask if Intel 13th generation can work on Windows 10.

You might think the answer is simple, but there’s a bit more to the story.

Before getting into the main topic of the discussion, it is important that you know about the 13th generation Intel processors available at launch. So here’s a refresher on the range and some quick specs.

Apart from these three main processors, “KF” versions also exist. The KF variants lack integrated graphics and are slightly cheaper. That’s the only difference between them.

Well, the short and simple answer to that is that Intel 13th Gen can run on Windows 10. However, using Windows 11 might be a safer bet for most people. Of course, if we talk about official support, both versions support 13th generation Intel processors.

In the real world, both will work without issue. However, 12th generation Intel processors showed some issues with Windows 10 at launch. The problem was that Windows 10 was having issues scheduling the processing of electronic cores (efficiency cores). This means that low priority tasks are assigned to electronic cores by default.

Although it is not a major problem, some programs such as Handbrake, a video encoder, create low priority threads to use all cores in the system. If Windows 10 assumes that these threads are not urgent, they will be assigned to electronic cores.

At the time, some games were also experiencing micro-stuttering issues due to this exact issue. The list is small, but still interesting.

There is a simple solution to this. Changing the power plan setting to High Performance may resolve the issue. The latest Windows 10 feature update would also fix this problem for most programs.

So while Intel 13th Gen may run on Windows 10, you’re probably safest to stick with Windows 11 to avoid minor glitches that may arise. Intel also recommends it.

Should I upgrade to Windows 11 for 13th Gen Intel?

Intel recommends that you run its 13th generation processors on Windows 11. Indeed, Intel designed processors around Windows 11 and Windows 11 has recently become the standard that most PCs use at the time of writing.

Windows 11 also introduced game optimizations that Windows 10 did not have, such as Auto HDR, meaning any game can now be “upgraded” to HDR. There were also a number of small tweaks that amounted to significant FPS increases when looked at cumulatively.