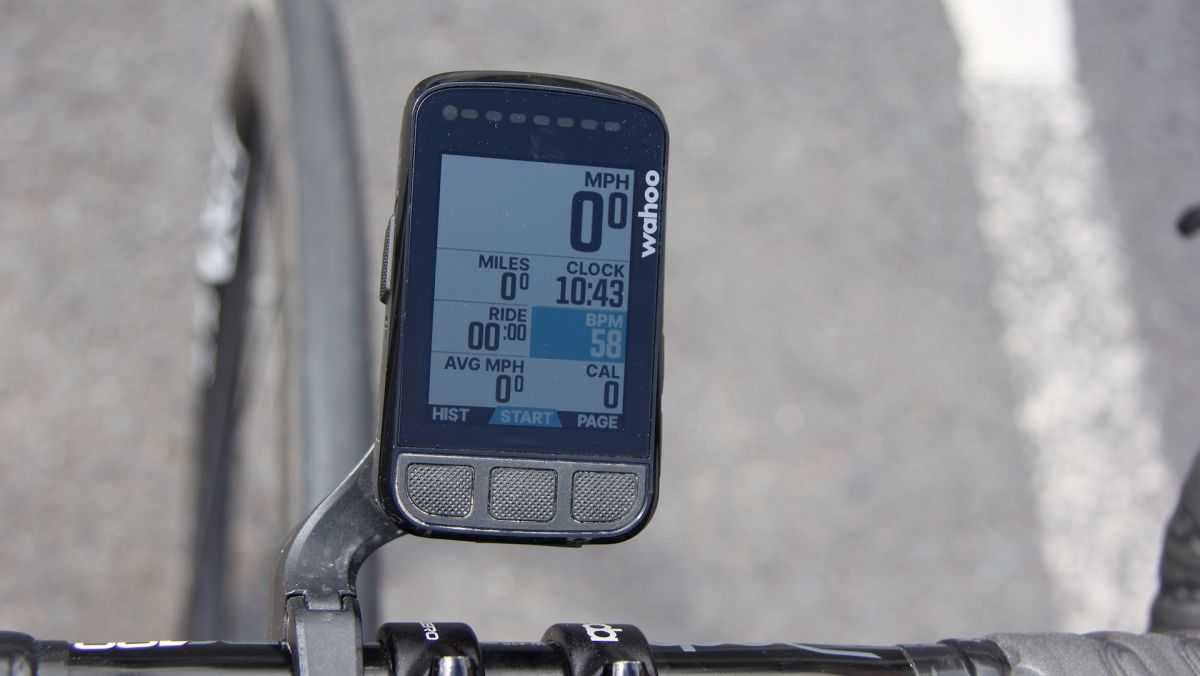 With its small size, streamlined design, sleek features, and reliable black-and-white button-operated display, the original Wahoo Elemnt Bolt bike computer (opens in a new tab)launched in 2017, was the perfect antidote to increasingly large and complex devices that seemed to be heading in the wrong direction despite their sophisticated mapping capabilities.

The Bolt v2 is much more powerful than its predecessor, and even the flagship Wahoo Elemnt Roam (opens in a new tab). It’s got four times the memory of the original Bolt with its 16GB, 64-color display, smart navigation, bigger battery that added a few grams (under 10g), and a whole host of extra features that echoed from the Roam, including the ambient light sensor.

But has the new Bolt complicated things, perhaps lost the simplicity of the original?

Well, it hasn’t lost any of Wahoo’s ease of setup. Basically, once you download the Wahoo companion app, you turn on the device, scan a QR code, follow the app’s instructions that ask you to enter your WiFi password, allow third-party apps, and more. , and you’re ready to roll. Simplicity itself.

Later you can configure your data fields so that when using the PerfectView zoom, which is still a feature of the new Bolt as it was the original, the Roam Watch and Elemnt Rival (opens in a new tab), you zoom in on the ones you want to see. All customization is done in the app, just like before.

There’s a 31.8mm front mount in the box, which fits very well with the unit, but the stem mount uses zip ties rather than bungees, which is a shame if you’re using a larger bike old one that doesn’t suit the front end, aero aesthetics and don’t want the stem mount permanently attached to it.

The new Bolt feels more refined. The new screen looks almost like a phone – although to be clear, it’s not a touchscreen – whereas the older model had more of a Gameboy Advance look and feel.

The screen measures 2.2 inches compared to the Roam’s 2.7 inches, but everything else, including the black bezel and logo placement, makes the Wahoo range very unified.

Something Wahoo has changed, however, are the three buttons below the screen. The older Bolt and Roam buttons are concave and not always easy to use with long-fingered gloves. The new Bolt has convex buttons that feel much more tactile, with the ‘switch’ feel coming sooner and with less force required than before.

As for the color screen, Wahoo didn’t go overboard. Although there are 64 colors compared to the Roam’s eight and the old Bolt’s zero, it’s still a muted rather than psychedelic display, just like the Roam’s.

Wahoo also reworked the fonts. There are lowercase instructions in a very simple sans serif font. He guides you, does not yell at you.

Personally, I find the row of customizable LEDs not particularly useful, but they are a signature Wahoo feature and are included here at the top of the display for you to take or leave.

The Bolt’s new mapping has new features – which are familiar to Roam users – such as rerouting, retracing, routing to a new location on the device. It will also – as you’d expect with its new functionality – take you to the start of a route.

I rode with Strava routes which I featured to sync with the Bolt. I also created mine on Strava. And I used the ‘Take Me To’ feature which works like a car GPS – you can do this via the app (preferred) or on the Bolt itself.

You can drive with your main data in front of you and each time a turn approaches, the marker appears in a green band and there are also audible alerts (beeps). I found it very easy to follow – actually much clearer than navigating the Roam on a Strava route.

Or following the black chevrons on the navigation page itself is incredibly easy. If you mess up, you know it pretty quickly with R2D2-like beeps and red LED flashes to warn you.

The only quirk I have – and C.W. reviewer Tom Epton, who also used the Bolt – found that there seems to be a possibility of you being on gravel even when you’ve selected “road” as your preferred surface, especially if you’ve gone off-road and the unit wants to redirect you as soon as possible.

We’ve also both found that your on-screen location can appear slightly behind your actual location, especially at high speeds. At normal cycling speeds this isn’t an issue, but on a descent it’s more noticeable.

The map coverage of the Bolt is huge – thanks to its 16GB memory. I also used it in Mallorca without having to download anything extra. Wahoo says millions of miles are traveled.

My test unit’s preloaded maps (much of Europe and the US) left an extra 2.07GB of space, and you can remove and add maps as needed.

Although the screen is quite small, I found it was still possible to identify and navigate to alternative, quieter routes on the fly – a bit camisole instead of the main street in Mallorca, for example – then navigate without a pre-planned route. There’s just enough screen space to stay oriented, but it does involve a bit of squinting once you’ve zoomed out to view a large enough area.

I haven’t experienced GPS drift with the Bolt – the red trail is so accurate it’s possible to see which side of the road you drove on even with a fairly narrow lane. There has been a very occasional quirk, where the track inexplicably goes as the crow flies a short distance, but I can’t think of any GPS device I’ve used where this has never happened.

As for the sensors, I used a Polar H10 heart rate monitor and Wahoo’s own Tickr (opens in a new tab)when the Polar has developed a battery drain. As you’d expect, it can connect via ANT+ or Bluetooth Smart and also WiFi for syncing.

For my Video Colnago C68 vs. Colnago Master Olympic (opens in a new tab) it was on our youtube channel that we used the Elemnt Bolt and a set of Wahoo Powrlink Zero Power Meter Pedals (opens in a new tab), which he “saw” every time they were used and which I have used with him regularly ever since. But, as I mentioned, it will pair with any ANT+ or Bluetooth device.

In short, I had no issues pairing it with sensors and syncing rides with Strava over WiFi happens in the background and is completely reliable.

The ambient light sensor works just like the Roam’s – it’s very sensitive to changes in light and, as with the Roam, I’m happy to keep it on “auto” without worrying about battery drain.

There are many other riding features offered by the Wahoo Elemnt Bolt and I won’t go into them all here, but they include Structured Workouts, Multisport Handover (for triathletes using the Elemnt Rival watch), Strava (opens in a new tab)Live segments, smart notifications including from WhatsApp (very useful) and specialized ANGI integration.

Wahoo recently added the Elemnt Summit climbing feature, which is its version of Garmin’s ClimbPro. This adds color coding to the various gradients coming up (green for 0-3.9% and dark red for 20%+) and lets you see how much climbing is left on your route that you’ve synced (or added via ‘lead -me to’) If you zoom out, you can view the elevation profile of your entire route or zoom in and look in detail at the climb you are doing.

Wahoo claims 15 hours of battery life and that seems pretty accurate. It’s not the longest battery life and it’s a little shorter than the Roam’s 17 hours, but charging is fast in under two hours with USB-C, which can carry more power (plus, the connector can go either way).

As for its position in the Wahoo range, it’s still cheaper than the Roam at the latter’s full RRP of £299.99 / $379.99 (although it’s currently on sale at many retailers including direct from Wahoo (opens in a new tab)) but it’s hard to see how it’s inferior unless you consider a smaller screen a downside and a shorter two-hour battery life.

While navigation in our experience isn’t perfect yet, the new Bolt nails everything else. It’s more expensive, but we’d say the new features and functionality justify the price increase while retaining the Wahoo usability and intuitiveness that made the old Bolt so good.