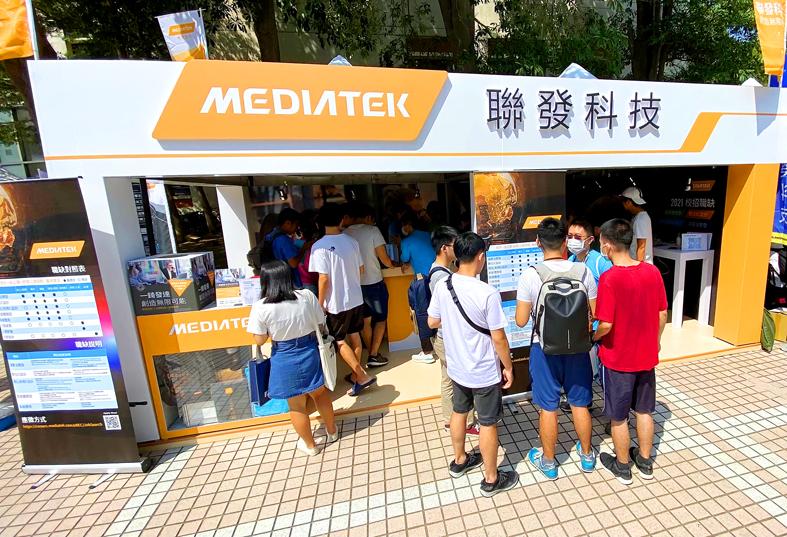 EXPOSURE TO CHINA:
Investors are increasingly concerned about MediaTek’s exposure to a Chinese market with the COVID-19 lockdowns, as well as the possibility of a price war

Handset chip provider MediaTek Inc (聯發科) posted record net profit for the last quarter yesterday and reiterated its target of 20% revenue growth for this year on strong demand for 5G smartphone chips from markets outside of China. China.

MediaTek has greater exposure to the Chinese market, but investors are increasingly worried that China’s COVID-19 lockdowns will slow its economy and weaken demand for smartphones and computers.

Investors are also worried about a possible price war waged by MediaTek’s rivals.

“MediaTek now has a very strong position in the global market, supported by our advanced technology and broad product portfolio, which enables us to better face competition and market uncertainties,” said MediaTek CEO. , Rick Tsai (蔡力行), at an online conference for investors.

The company is pushing for a migration to its 5G, Wi-Fi and TV chips, and expanding its geographic footprint with global customers, Tsai said, adding that the company enjoys a competitive advantage in the high-end phone chip business. range and 5G.

MediaTek plans to double its shipments of 5G chips to markets outside of China this year.

The company has so far met its target of maintaining its gross margin between 48 and 50 percent and maintaining a three-year composite annual revenue growth rate of 15 percent, Tsai added.

However, MediaTek has revised down its forecast for global 5G smartphone shipments to between 660 million and 680 million units this year, from a forecast of 700 million units three months ago, citing fallout from the uncertainty. on the global economy.

MediaTek still expects 5G smartphone penetration to climb to 50% this year from 30% last year, he said, adding that he expects the penetration rate to climb. 70% over the next two years.

Responding to investor concerns about a potential price war, Tsai said the company “doesn’t believe racing to the bottom is a good or effective strategy.”

In a tough market environment, the price cut “doesn’t really generate a lot of additional demand,” he added.

MediaTek expects revenue this quarter to increase 3-10% from last quarter’s NT$142.71 billion ($4.85 billion). This would represent an annual expansion of between 17 and 25%.

Mobile phone chips are expected to see the fastest growth as MediaTek’s new high-end 5G chips – the Dimensity 9000, 8100 and 8000 – will be available in more markets including India, Europe and India. Southeast Asia, he said, adding that demand is also increasing for its 4G smartphone chips, Wi-Fi chips and power management chips.

Gross margin this quarter is expected to decline slightly to between 47.5 and 50.5%, compared to 50.3% last quarter, which was the highest since the third quarter of 2010.

The company’s board has proposed the distribution of a cash dividend of NT$73 per share, he added.

Comments will be moderated. Keep comments relevant to the article. Remarks containing abusive and obscene language, personal attacks of any kind or promotion will be removed and the user banned. The final decision will be at the discretion of the Taipei Times.