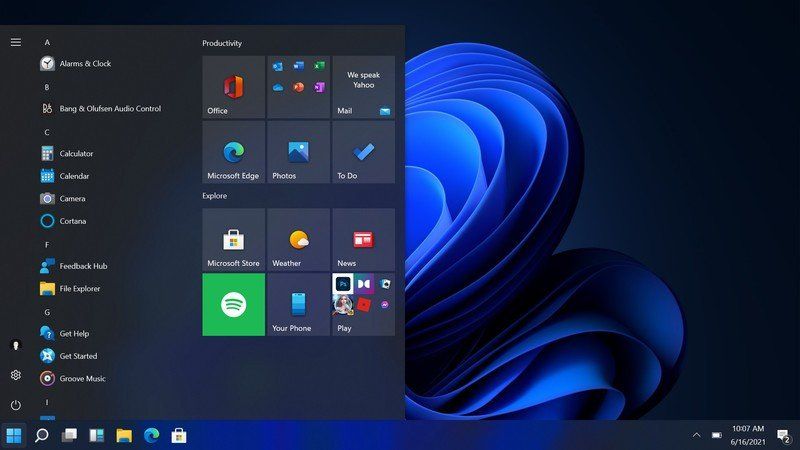 Windows 11: everything you need to know

It’s official: Microsoft has announced that the next version of Windows will be called Windows 11 and will be released as a free update (and on new PCs) by the 2021 holidays. Over the next few weeks and months, Windows insiders can try out all the new features, and we’ll all learn more about what’s to come. Here’s everything you need to know about Windows 11 right now.

Insiders next week, released later in 2021

If you’ve signed up as a WIndows Insider, you should be able to try a first official version of Windows 11 as early as next week (week of June 29), according to Microsoft. Microsoft says anyone in the Dev or Beta channels will be eligible to get Windows 11 Insider builds, provided their hardware meets the requirements.

To subscribe or edit your channel in Windows Insider, go to Settings-> Update & Security-> Windows Insider Program. Microsoft also indicates that the official upgrade will be rolled out by the “holiday season”. So expect any time between October and December.

Like Windows 10 before, Windows 11 will be a free upgrade for anyone with a recent older version of Windows and the right hardware. According to Microsoft’s blog, the minimum configuration required is:

The TPM 2.0 requirement could exclude many users, especially those with home-built PCs. Not all motherboards come with a built-in TPM, although some motherboards can be upgraded with a TPM that you can purchase after the fact. Many systems have TPM on board, but it is disabled, so you will need to enable it in your BIOS.

Even fairly new processors may not work

Microsoft has also strongly hinted that even computers with TPM 2.0 and Secure Boot, but older than an Intel 8th Gen Core or AMD Ryzen 2000 processor will not be supported in the final release (for versions preliminary, older hardware should work). The company released AMD and Intel processor compatibility lists who omit anything older than these generations.

The Intel 7th Gen Core and AMD Ryzen 1000 series were both released in 2017 and are still actively manufactured and sold. For example, Microsoft’s own Surface Studio 2 contains a 7th generation Core chip and sells for over $ 3,000.

We interviewed a Microsoft spokesperson on the lists and did not get what we consider to be a firm response. Meanwhile, on Twitter, Microsoft Vice President Steve Dispensa wrote that “Windows 11 is only supported on the processor list I posted above. There are more requirements than TPM 2.0 support (and all supported chipsets must have TPM 2.0, so this is generally not a blocking requirement). “

However, Dispensa also tweeted that “the lists will evolve over time”. If they don’t, a large portion of users won’t be able to run the new operating system.

The new Windows Start menu appears in the middle of the screen by default, but you can change a setting to make it appear on the left. No more dynamic tiles, replaced by simple and colorful icons.

According to Microsoft, the menu uses “the cloud” to help you as it displays recommended apps / documents no matter what device you were previously working on. As an example, Carmen Zlateff, Partner Director of Windows User Experience at Microsoft, showed how a document she was viewing on her phone appeared in the Start menu on her PC.

Windows 11 also offers a new search experience, which now appears in a separate window (no longer a text search bar). It’s also supposed to search across all devices and services, as well as using Bing search for the web.

In Windows 11, hovering over the Minimize / Maximize button gives you a choice of different snap layouts, depending on your screen size. So, for example, if you have three apps open and enough space, you will have the option of distributing them equally among the three or having one take up half the screen and the other two a quarter each.

If you need to interrupt your workflow, for example by replying to an incoming email, you can restore your captured layout by clicking an icon in the taskbar. The icons for these “snapshot groups” will appear next to the app icons so you can easily go back to a full layout with one click.

If you have a tablet or laptop that you connect to an external monitor and then disconnect, Windows 11 will automatically minimize the windows that were on the external monitor (s) when you disconnect, and then automatically restore them to the monitor when you log off. reconnect. . This is a huge win for anyone who has to take their laptop to a conference room for a meeting and then return to their desk when it’s over.

The virtual desktop experience has been improved so that each desktop can now have its own unique wallpaper and appearance. Zlateff said it’s a good way to separate work from home and gaming experiences.

The Teams icon will be on the taskbar and you can use it to make calls to anyone else who uses Teams on any device, including Android and iOS devices. You will also be able to send and receive SMS messages from the taskbar.

The news feed adapts to you, trying to bring in the feeds you want, based on your preferences. There is also a feature that allows you to tip certain content creators.

A sliding pane on the left side of the screen shows you “Windows widgets” a collection of news, weather and stock information. This is a clear evolution of the weather and news bar that we see in recent versions of Windows 10.

Say goodbye to “tablet mode”. When you switch to tablet mode on a 2-in-1, you’ll see a little more space between icons and larger touch targets, but the interface will largely remain the same. You’ll also be able to use the same gestures – a three-finger swipe, for example – that you use on a Windows Precision touchpad.

The stylus experience has been updated to allow haptic feedback when you write. The touchscreen keyboard is brand new and will allow you to customize its appearance while using emojis. Voice typing has also been improved and automatically adds punctuation while taking voice commands such as “delete that” to help you edit.

If your monitor supports HDR but your game doesn’t, Windows 11 will convert color and lighting. In a demo, Microsoft’s Sarah Bond showed how this feature makes Skyrim much more colorful and realistic. This feature originated with Xbox and is now coming to PC.

Another Xbox feature now linked to Windows, DirectStorage allows your game to load content directly from your NVMe SSD into your GPU memory, without using a lot of CPU resources. This means faster level load times and less waiting time.

Xbox Game Pass will be built into Windows 11, so if you purchase a subscription you’ll have access to hundreds of titles. Xbox Cloud Gaming will also be available so you can even play on systems with less hardware.

The store will support all kinds of apps, including those that program in PWA, UWP, or Win32 formats. If you use your own commerce engine, you will not have to pay any revenue share to Microsoft. However, if you use Microsoft’s engine, you will have an 85/15 split for classic apps or an 88/12 split for games.

You will be able to launch Android apps right in WIndows and find them in the MIcrosoft store through Amazon’s own app store. Windows will use Intel’s Bridge technology, a runtime post-compiler, to allow Android apps to run natively and be treated like any other Windows app that you can hook, pin to start. , etc. Panay demonstrated this functionality by running TikTok.

Yes, this technology will work on both AMD and Intel processors. Intelligence writes that “Intel Bridge technology is a runtime post-compiler that allows applications to run natively on x86 devices, including running those applications on Windows. More importantly, in a subsequent release, Microsoft’s development platform manager Kevin Gallo confirmed that this “Android subsystem for Linux” will work on both processor brands.

Prepare for the marketing blitz. Microsoft says “Windows 11 ready” PCs are coming. Since the hardware requirements are so low that virtually any new PC can meet them, it sounds more like hype than useful information.

We have already received updates from Acer and Dell indicating that all or the vast majority of their recent offerings are compatible with Windows 11. Suffice it to say that if your PC has less than 4 GB of RAM and a processor below 1 GHz, Windows 10 probably doesn’t work that well for you either. However, we do not know if all of these computers come with TPM 2.0 modules on their motherboards.

A pie for the summer holidays