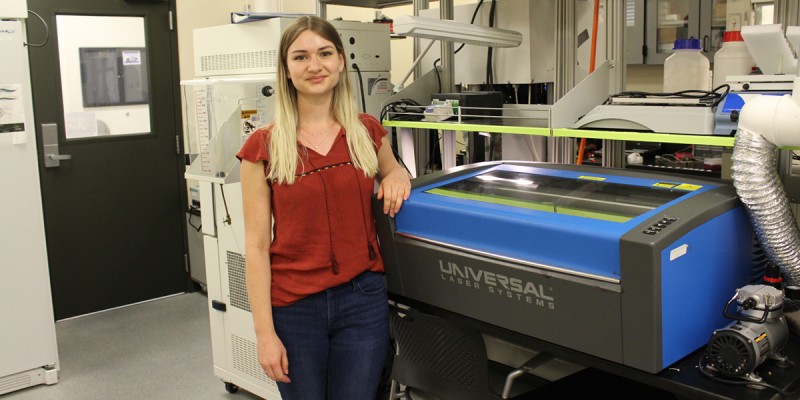 As a child in the small farming town of Callicoon, NY, Mya Landers ’21, MS ’22, had a passion for science. Astronomy, biology, physics – she loved them all.

She came to Binghamton University as an engineering major. Her sister, two years her senior, studied at the Decker School of Nursing, but Landers didn’t have a clear idea of ​​what field she would like to pursue.

Through its Engineering Design Division program, every freshman at Thomas J. Watson College of Engineering and Applied Science learns about the various choices available at Binghamton – and the puzzle-like skills needed to create flipped electrical circuits on the Landers’ bulb bothers.

“I think I just got lucky, because I found that I really liked working on projects physically, rather than many other jobs working at desks or doing something on your computer” , she said.

Landers quickly put his new skills to the test, while learning the value of teamwork.

“During my freshman year, I participated in a hardware hackathon with a group of people I knew a little about but didn’t know very well,” she said. “They were mainly from IT, then there was an electrical engineer and a mechanical engineer.

“I decided to enroll at the last minute, and it was one of the most fun experiences ever. You’re up for about 36 hours with a whole bunch of other students trying to come up with an idea random for some sort of physical project to show the judges at the end. It was so much fun because I knew next to nothing. I didn’t learn any kind of electronics in high school, so that’s all I got I already learned in my first semester at Binghamton. We built a little robot that ran around and told you the temperature and humidity, and you could control it with a little remote,” Landers said.

Although the female to male ratio studying at Watson College has steadily increased over the past few decades, with groups like the Society of Women Engineers offering camaraderie and support, female students still make up around 25% of the college’s population.

Landers said she had no problems being one of the few women in her electrical engineering classes, and it only worked harder to do well.

“There’s an inner feeling that I have to prove that women are as good at engineering as men are,” she said. “There is a bit more motivation and dedication to do a good job. Because you are a woman, you want to portray all other women in a good light.

A key mentor during Landers’ time at Binghamton was Professor Seokheun “Sean” Choi, a faculty member in the Department of Electrical and Computer Engineering at Watson College. As an undergraduate and graduate student, she did research at Choi’s Bioelectronics and Microsystems Laboratory.

“I will always appreciate Professor Choi, because there is no possible way I could have achieved all of this without his guidance,” Landers said. “He’s always 10 steps ahead of everything with his ideas, and he keeps everything in his lab so organized and running smoothly. He’s just an amazing advisor, an amazing teacher. I was so lucky to work with him throughout it all.

For her master’s thesis, she researched and wrote about two topics that are part of Choi’s research wheelhouse: paper-based microbial fuel cells and circuit components. Through a process of wax modeling, screen printing, and applying various semiconductor inks, she designed customizable circuits comprised of transistors, resistors, and supercapacitors, all on a single sheet of paper.

As a potential power source for these inexpensive disposable circuits, she presented biobatteries powered by bacterial metabolism on a paper substrate. The new approach of using human body fluids for battery activation and enhanced shelf life capabilities using robust and sporulating bacterial biocatalysts resulted in a publication in a journal Nano energy.

These types of fully integrable paper-based electronic components and power sources hold promise for future use in single-use electronic devices with potential applications in point-of-care diagnostics, logistics tracking, and environmental testing and food.

“Mya is one of the best students I’ve mentored in the past 10 years here at Binghamton,” Choi said. “She was a hard-working researcher, never giving up her work until she got what she supposed. She successfully completed her master’s thesis work with two articles published in top journals and a manuscript under review.His work has groundbreakingly designed and engineered a new bacterial food source that can enable a self-powered diagnostic test for anyone, anywhere, and anytime. .

Landers found that staying in Binghamton for an extra year to pursue graduate school was an easy decision when most MS programs last two years. The difference? Some undergraduate credits are counted twice for a master’s degree.

“You’re already there, you already know the neighborhood, you’re settled in, you know the teachers and what you’re getting yourself into,” she says. “It’s just one more year after four years here. Doing a master’s degree in just one more year is something you really can’t pass up, especially the financial and convenience aspects.

Landers didn’t have a job lined up when she graduated in May, as she hopes to relax a bit this summer after five years at Binghamton, but she is pursuing industry positions in research and development.

“I like to joke that I’ll be carrying my 87-page thesis in my purse, so in case anyone mentions it, I can pull it out and show it to them!” she said laughing.

She has some advice for incoming students: “Don’t be intimidated by what you think engineering students should be. I had never had any engineering experience before coming here. In high school, I never showed any specific promise for engineering.

“But when I got here, there was a part of me that said, ‘Why not?’ It was one of the best decisions I’ve made. If you try and see if you like it, it may surprise you, and it may end up being something you’re really passionate about.