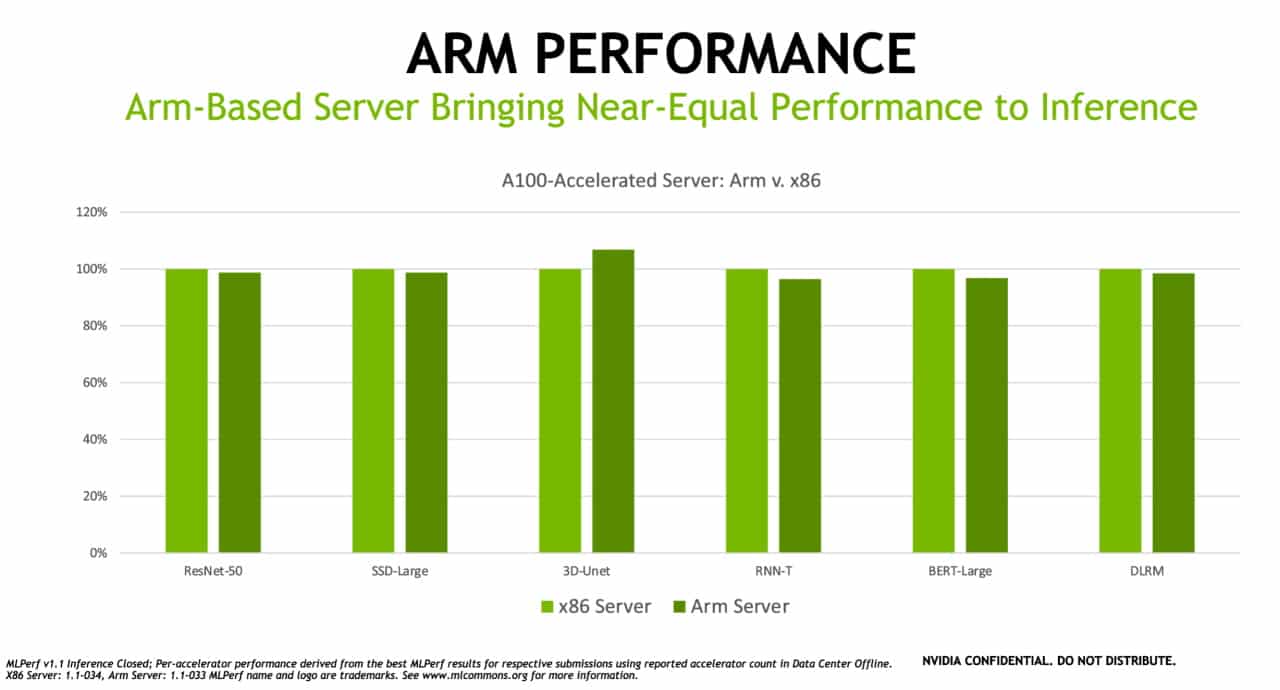 NVIDIA’s deal to acquire ARM has been on hold for a year now, and the deal doesn’t seem to be taking off for quite a while now. However, the company has already started promoting compute architecture in benchmarks. Recently, the company’s A100 GPU-equipped server with ARM and x86 processor had very similar performance.

However, the fact remains that if ARM outperforms x86 in low power / high efficiency scenarios, the processor cannot scale power efficiency at high clocks. The main reason for this is the leak, and that’s why Apple’s new A15 chips have been a relative disappointment so far.

But servers are still touted as having the absolute advantage of high performance computing, so this is an area where x86 has generally reigned supreme. ARM-based A100 server processors managed to beat x86 in the 3d-Unit niche workload.

“Arm, as a founding member of MLCommons, has been engaged in the process of creating standards and benchmarks to better meet challenges and inspire innovation in the accelerated computing industry,” said David Lecomber , Senior Director of HPC and Tools at Arm.

“The latest inference results demonstrate the readiness of Arm-based systems powered by Arm-based processors and NVIDIA GPUs to tackle a wide range of AI workloads in the data center. “

However, in terms of inference, GPUs remain the king. And Green didn’t hold back any punches, and the company pointed out that an A100 GPU is 104 times faster than a CPU in the MLPERF benchmarks.

Inference is what happens when a computer runs AI software to recognize an object or make a prediction. It’s a process that uses a deep learning model to filter data and find results that no human could capture.

The A100 GPU has been tested in the popular Image Classification benchmark ResNet-50 and even Natual Language Processing, and the GPU has reigned supreme over everything. Currently, NVIDIA’s agreement to acquire ARM has been made due to legal issues. It appears that the European Union has no desire to let the UK-based chipmaker fall into the hands of an American company.