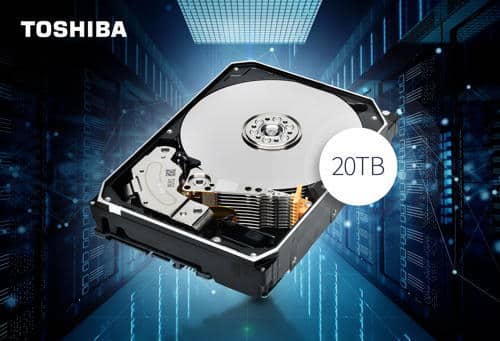 New series of hard drives for data centers and the cloud

Toshiba has introduced a new series of hard drives. The Toshiba MG10 series is said to not only offer CMR but also can guarantee storage capacity up to 20TB and power-saving operation on top of that.

A major improvement of the new MG10 series would be the storage capacity. While the predecessor only had a maximum of 18TB, the successor would have up to 20TB. Additionally, CMR hard drives are supposed to be compatible with various software and operating systems. Therefore, they are not only suitable for use in data centers. They are also said to be perfectly suited for building a cloud. The reason is that they also need to be able to handle mixed workloads. The fact that Toshiba MG10 hard drives can offer a lot of performance is also made clear with the technical details that the supplier reveals as part of its presentation.

The unique magnetic discs inside are said to be able to spin at a speed of 7,200 revolutions per minute. On top of that, it should be possible to process a total of 550TB with them in a year. In terms of connectivity, the hard drives apparently also show themselves from a good side. You should have a choice between SAS and SATA interfaces. The 3.5-inch form factor is meant to be the same across all models. The jackets are supposed to be helium sealed and to operate in an energy efficient manner. Toshiba apparently wants to meet the growing demand for cloud solutions in the private sector, but also commercial.

Toshiba’s plan seems to be working. In particular, the energy-saving design along with the high storage density ensure that many users could probably opt for the MG10 series. After all, a cloud system based on this not only saves energy, but also space. Large data centers, in particular, not only save on investment costs, but also on operating costs. Since the amount of data in enterprises is more likely to grow than stagnate or even shrink in the future, Toshiba is taking a step in the right direction with its growing storage density. The competition will now have to think about what they will offer to counter the new MG10 series.

What the Toshiba MG10 series is capable of will probably only be seen in practice. However, the first details already look promising. In particular, the capacity of up to 20TB should appeal to many data center operators or people looking for an energy-efficient cloud solution. The first copies of the hard drives should probably be delivered in the fourth quarter of this year. We are curious. You can find more information about Toshiba’s MG series on the company’s official website.

Five Russians charged with violating US oil and weapons sanctions