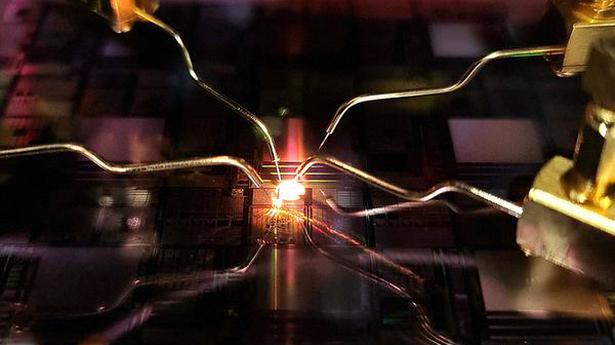 Researchers at IIT Bombay have developed ‘memory technology’ that can, in principle, revolutionize Indian industry and the many applications that require semiconductor chips, such as in defense, automotive and industry. future aspirations in the manufacture of mobile phones. Hard drives, flash memory, etc. are examples of memory technology. There is also another form of memory called single-use programmable memory (OTP) where memory is written once, stored for a lifetime, then retrieved and used multiple times. This finds various uses, one of which is the correction of faulty chips that have been mass produced for specific applications.

For example, think of a chip that helps read the temperature. Due to a manufacturing defect, the chip can read 100 degrees Celsius as 101 degrees Celsius. This 1 degree “offset” can be corrected by storing the error correction parameter in OTP memory. This is done only for each chip and once stored, the memory corrects the output of the chip for its lifetime.

“OTP memories are also used for other purposes, mainly three: chip identity, secure information storage, and chip calibration for error correction,” says Udayan Ganguly, professor at the IIT Bombay, which holds the patents for the invention with A. Lele, S Sadana and P. Kumbhare.

To store the correction value, the researchers used eight memory cells, each of which would store a “bit” (i.e. a value of zero or one). Each of the memory cells consists of an ultra-thin layer of silicon dioxide with a thickness of 10 to 15 atomic layers. This is deposited evenly on an eight-inch plate-sized silicon wafer to form millions of nanoscale capacitors. “The virgin silicon dioxide layer is insulating, passing a very low current [which in digital electronics is read as a â€œ0â€]. A nano-scale lightning bolt is generated of 3.3 volts to blow up the capacitor, leading to a short circuit which produced a high current [this is a â€œ1â€]Â», Explains Prof. Ganguly. Thus, the OTP memory remembers either state “0” or state “1” throughout its lifetime.

The group, in collaboration with the Semi-Conductor Laboratory, Mohali, Punjab (SCL), has successfully demonstrated the production-ready, 180-nanometer CMOS eight-bit memory technology, according to a press release from the principal’s office. Scientific advisor to the Indian government. Reiterating this, Prof Ganguly says, â€œWe have shown that memory cells and arrays meet all specifications of the trimming application when manufactured in the 180 nanometer SCL CMOS line. These include successful operation between minus 40 degrees C to 125 degrees C and reliability to ensure greater than 95% efficiency on eight-bit memories.

According to him, much of the chips manufactured may have to be discarded for flaws that can be corrected using this technology. This technology is the first native semiconductor memory technology to be fabricated at a 180 nanometer node. This is therefore a major national step for semiconductor innovation, says Professor Ganguly.

There are other methods of making OTP memories than those described above. However, these require difficult engineering techniques and also require high voltage, resulting in a large area penalty.

â€œIn contrast, we use a dedicated insulating material which is specially designed silicon dioxide at a thickness of 2.5 nanometers to decompose at 3.3 volts without any special structure with a standard transistor. Thus, the transistor is not disturbed and no special high voltage generation is needed, â€explains Prof. Ganguly, emphasizing the attractive features of the technology.

Semi-Conductor Lab (SCL) in Punjab is the first customer to try to use this technology for internal purposes. In addition to collaborating with SCL, the IIT Bombay team has partnered with IIT Delhi, SETS Chennai and Defense Research and Development Organization for hardware encryption.

â€œThe concept arose out of a doctoral thesis at IIT Bombayâ€¦ This is the first indigenous 180-nanometer memory technology to be successfully transferred from the lab to the factory in 2021. It took six years to translate research into manufacturing, â€explains Pr Ganguly.

A small, flexible PC instead of a bulky laptop or desktop