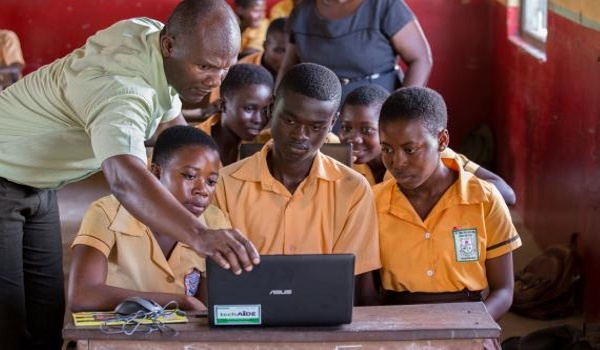 The Ghana National Teachers Association (GNAT) on September 23, 2020 called on the government at a stakeholder forum to provide every teacher with a laptop and modem to ensure innovative teaching means and improve virtual learning during the COVID-19 period.

In February 2021, the government of Ghana, through the Ghana Education Service (GES), announced plans to secure laptops for all teachers in the country after consulting with teacher unions. The project is dubbed â€œOne Teacher, One Laptop (1T1L).

To ensure a smooth distribution process, GES Deputy Director General Anthony Boateng sent letters to all regional directors to liaise with high school principals / mistresses in their region to provide them with a validated list of names and identity of personnel. number of teachers in their different schools.

Even before the initiative was launched, the Ghana Education Service detected fraud in the names submitted to its office.

They revealed that fake names with fake IDs had been submitted for clearance.

The President, Nana Addo Dankwa Akufo-Addo, on Tuesday March 9 announced the acquisition of approximately two hundred and eighty thousand (280,000) laptops for teachers during his first State of the Nation address.

This was also confirmed by Deputy Education Minister-designate Reverend John Ntim Fordjour on Thursday, June 24, 2021 on the occasion of the 90th anniversary of the GNAT Investment Forum.

However, Vice President Dr Mahamudu Bawumia at the launch handed over 350,000 computers against the 280,000 previously announced, making it a total of 70,000 additional laptops.

When did the distribution start

On September 3, 2021, Vice President Dr Mahamudu Bawumia launched the â€œOne Teacher, One Laptopâ€ policy in Accra for further distribution across the country.

As part of the program, it is expected that all kindergarten teachers in public schools will receive a laptop computer as part of the initiative.

The demands of the teachers’ unions

The initiative received a series of backlash from teacher unions across the country who raised red flags over the cost.

The first was a viral sound clip that would be an interview given on Peace Fm by a person yet to be identified giving a different breakdown of the cost versus the previous cost.

Some teacher unions such as All Teachers Alliance Ghana (ATAG), Innovative Teachers Union (ITU), say they suspect the cost of laptops has been inflated and have therefore called on the Human Rights Commission and of administrative justice (CHRAJ) to investigate the purchase. process and also called on their members to boycott laptops.

The Ghana National Teachers Association (GNAT) also criticized the GES by emphasizing the actual cost of GHc 1550 announced by the government.

Some teachers have also taken to their Facebook wall to ridicule the Ghana Education Service about the cost.

Other unions believe that laptops will ease the burden on teachers. Coalition of Concerned Teachers (CCT) communications director Adokwei Ayikwei-Awulley, in an interview with Adom TV on September 6, said laptops would help teachers and urged union members to accept computers , despite concerns expressed about the cost.

A former president of the National People’s Convention (PNC), Bernard Mornah, joined the many who did not agree with the initiative. In a Ghanaian television interview on September 6, he said teachers need textbooks, not laptops.

Pandits and entertainment enthusiasts also “discussed” the benefits of handing out laptops to teachers while some schools stay under trees. 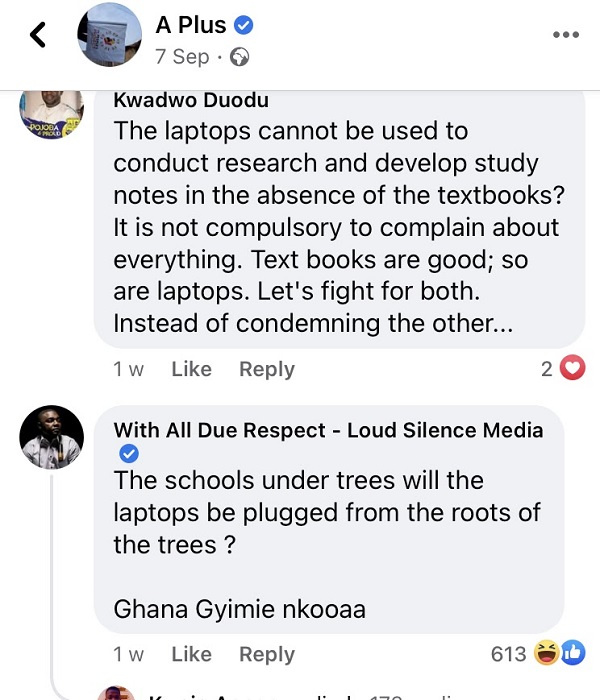 A press release issued by the Ghana Education Service (GES) and signed by the head of the public relations unit, Madam Cassandra TWUM Ampofo, on September 9, 2021, indicates that the total cost of each laptop is 1,831, 47 Ghc. 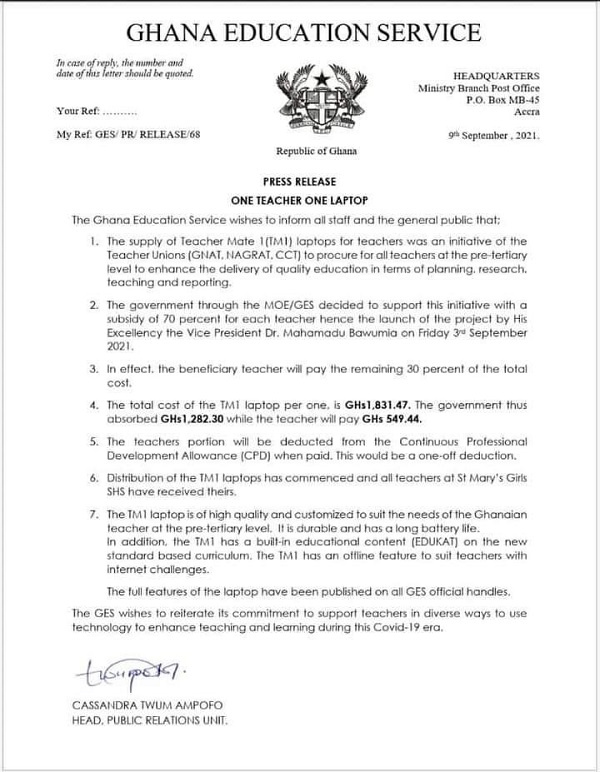 Response from the Ministry of Education

Exactly four days after the launch, the Deputy Minister of Education, Mr. Ntim Fordjour, gave an interview to Umaru Sanda on the Face2Face show on Citi Television. The Minister confirmed the cost of each laptop as GHC1550.00 and not GHC1831.47 as previously announced by GES.

Speaking on Angel Fm’s flagship program Angel in the Morning, hosted by Kwame Tanko, Department of Education deputy spokesperson Mr. Akosah Ernest insisted that the true cost of each laptop is 1550.00 GHC.

â€œThe deputy minister indicated on several platforms the cost as mentioned previously. There has been no change and we stand by it. Again, the 30% deduction does not come from their wages as it is said elsewhere. It is taken from the Teachers Development Fund. This confirmation should be enough to dispel all doubts and confusions, â€he said.

Asked about the quality of laptops, he added:

â€œWe had concerns about the quality. I am not a technical person but laptops are not inferior. Moreover, the ministry would not have bought them without the consent of the teachers’ unions. They were involved in the process from day one because they launched the proposal and the department signed up to it. I don’t think the unions intend to harm anyone. They care about their members and won’t go for substandard laptops. We are not forcing laptops on them, it is a necessity and we will help them.

What is the specification of the laptop

In an interview with Dubawa, Mr. James Amoah, computer programmer and CEO of Tech Solutions Ghana, explained that the quality of Intel celeron cannot be compared to the latest specifications of laptops like i3, i5, i7, Xeon.

â€œIt would be inappropriate to totally discredit the quality of the celeron processor. Indeed, some of these processors are updated over time depending on the brand of the computer. However, if you are interested in machine speed, every IT expert will definitely recommend the latest specs, â€he added.
Funding

Seventy percent (70%) of the costs absorbed by the government are funded by GETFund.

â€œGETFund is proud of its role in delivering the government’s vision and remains committed to investing in both physical infrastructure and initiatives such as this to improve teaching and learning outcomes in the country, â€said GETFund administrator Dr Richard AMPOFO Boadu at the launch of the initiative.

KA Technologies (KAT) is a limited liability company registered in Ghana under the Companies Act 2019 (ACT 992).

The company is engaged in manufacturing, training, connectivity and technology solutions for identifiable societal segments such as education, health and agriculture, among others.