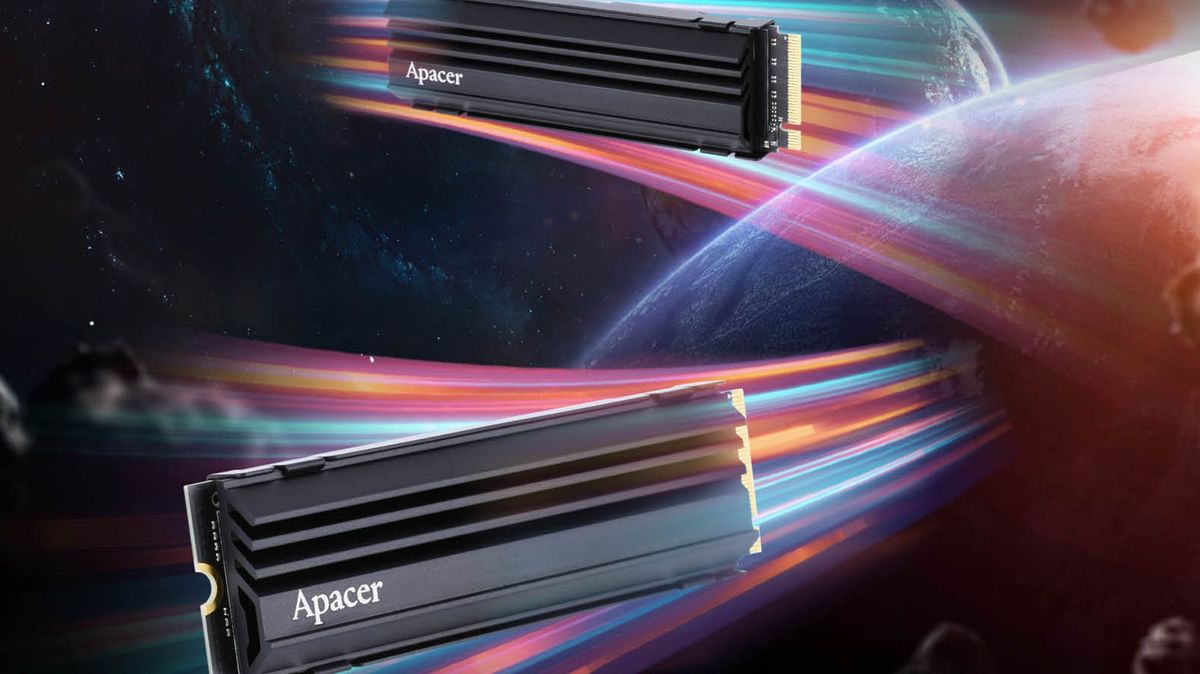 At Computex 2022, Apacer announced its NVMe Gen 5 SSDs promising sequential performance of up to 13,000 MB/s read and up to 12,000 MB/s write. That’s almost double what’s currently available through the latest line of Gen 4 NVMe SSDs, and a clear indication that the additional bandwidth of PCIe 5.0, which is currently supported by 12th Intel Core processors, some of the best processors for gaming, delivers. speed.

At the event, the Apacer AS2280F5 and Zadak TWSG5 were teased, both NVMe Gen 5 SSDs supporting speeds of up to 13,000/12,000 MB/s each. As expected, both models were shown with considerably bulky heatsinks to keep internal temperatures low. However, little is known at this point about the motherboard space required to accommodate such large heat sinks.

Both Gen 5 drives have been confirmed to use the latest NVMe 2.0 standard, which was originally released in June last year, and features substantial overall changes over what we’ve seen from NVMe 1.4 over the past three years.

What Makes NVMe Gen 5 SSDs So Much Faster?

Simply put, PCIe 5 doubles the available bandwidth of what’s currently possible via PCIe 4, with additional CPU lanes going to components like your graphics card and SSD. If we take the rates claimed by Intel (opens in a new tab) taking into account, which is the only chipset manufacturer currently offering PCIe 5.0 compatible processors, we see that the theoretical maximum speed is in fact doubled (speed per lane).

Gen 4 maxed out at 16 GT/s, while Gen 5 is said to be capable of up to 32 GT/s as well. Essentially, with double the throughput available, your components have a lot more data available to take advantage of. With games continuing to require much larger file sizes and VRAM-intensive textures following advancements like the DirectStorage API, you’ll need all the available bandwidth to reduce load times and consistency. frame rates.

For Gen 5 SSDs in particular, it comes down to which controllers are used to get the most out of the sequential performance available. If we go back to Gen 4, the hardware is typically capable of up to 8000MB/s, with many of the most popular NVMe drives on the market today, such as the Kingston Fury Renegade, reaching around 7,300 MB/s. MB/s mark. That’s thanks to the Phison E18 controller, which you’ll find on many drives that perform in the realm of 7,000 MB/s reads and above right now.

We know Phison is working on their new PCIe Gen 5 controller, the PS5026-E26. The company claimed that it will deliver sequential performance of up to 12,000MB/s read and 11,000MB/s write, with 4K random rates of 1,500K and 2,000K IOPS respectively, depending on the hardware obtained by TechPowerUp from the beginning of the year. It’s currently unknown which new drives will support the likes of Phison E26, but we do know that these claimed numbers are a good benchmark to keep in mind with Gen 5 SSDs on the horizon.

When can we expect Gen 5 NVMe SSDs to launch?

Going by the AMD Computex 2022 keynote, we can generally expect the first mainstream Gen 5 NVMe SSDs to launch between September and December 2022. The “fall” date has been given in connection with the launch of the company’s newest Ryzen 7000. Socket AM5 processors, confirmed PCIe 5.0 compatibility.

During the conference, the names of Crucial and Micron were dropped as partners who would have Gen 5 NVMe drives ready for launch alongside Zen 4. Additionally, the Phison logo was present among several other notable partner logos, including that of Gigabyte, Corsair, Sabrent, and Apace.

It’s worth remembering that we already had a brief look at what’s possible on the platform earlier in the year. In January, TeamGroup announced the T-Force Cardea Gen 5 SSD which also promised speeds of up to 13,000/12,000 MB/s for reading and writing.

Whether you’re running an Alder Lake Intel system or waiting for the Ryzen 7000 series to launch before upgrading to PCIe 5.0, one thing is certain: with games more demanding on the platform than ever before, the extra bandwidth will enable performance capabilities. never before designed as we head into 2023.

Get ready for the latest Gen 5 compatibility with the best pc cases, best ram for gamingand best gaming monitors.