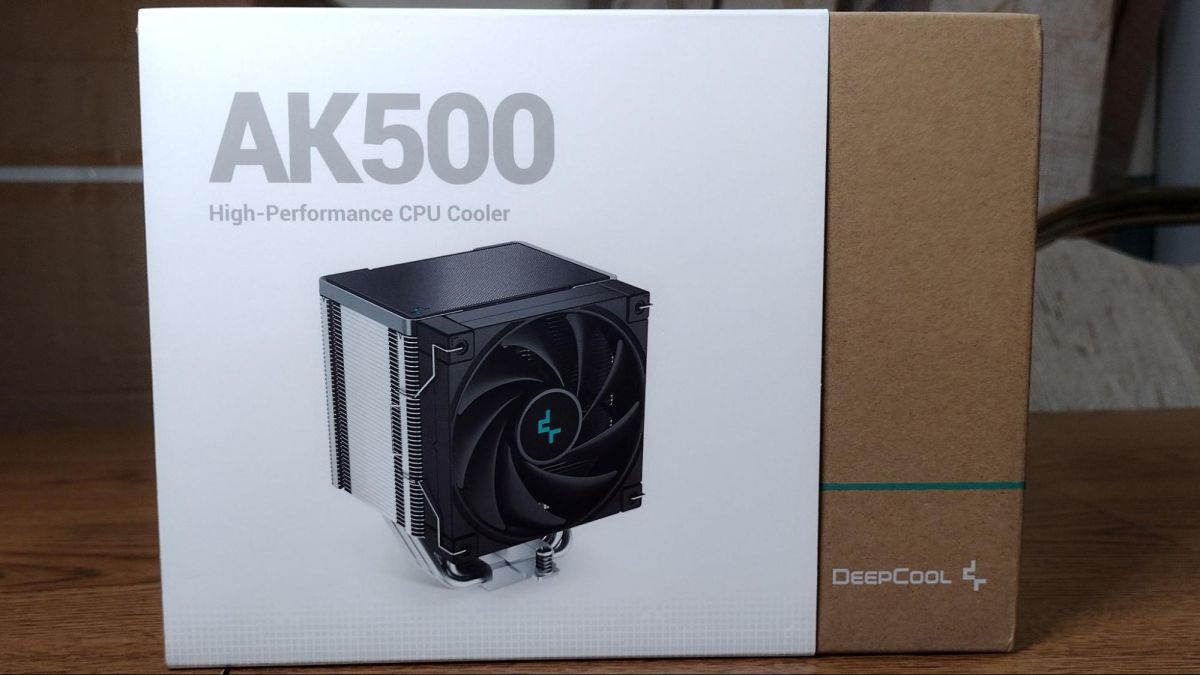 DeepCool was founded in Beijing in 1996 and has in recent years gained a solid reputation in the CPU Cooler space with options such as the Assassin III and AK620considered one of best cpu air coolers on the market. The company’s lineup includes both air coolers and AIOs, as well as computer cases, keyboards, power supplies and other accessories.

But with the latest processors from AMD and Intel requiring ever more efficient cooling, DeepCool is back with a new AK500 air cooler. The AK500 has a chungus radiator and a 120mm FK120 fan, but is that enough to tame Intel’s 12900K and earn a spot on our list of best coolers? We’ll have to put it through some testing to find out. But first, here are the specifications of the AK50 from DeepCool.

DeepCool’s AK500 is packaged in a medium-sized box, with cardboard and foam to protect the cooler during transport.

Included with the package are the following:

Installation of DeepCool’s AK500 is generally easy. To start, you’ll press the backplate against your motherboard, then use the screw standoffs to secure it. Then place the mounting bars on the spacers and secure them using the thumbscrews provided.

The thermal paste for the AK500 does not come pre-installed, but instead DeepCool includes a medium-sized tube of thermal paste that can be used for multiple applications. After applying the thermal paste, you will need to secure the heatsink against the mounting bars with the captive screws. This is where it can get a little tricky. The right screw is fairly easy to attach, but the left screw requires the use of a long screwdriver through the body of the heatsink, and it can be difficult to aim properly.

What is different from other coolers?

The heat pipes of the AK500 have an angled offset, which allows compatibility with high RAM – you shouldn’t have to worry about high RAM causing installation issues. DeepCool states that the internal capillary structure of the heat pipes has been optimized to achieve high heat dissipation regardless of the orientation of the cooler, whether installed vertically or horizontally.

The included metal mounting bracket has been optimized to ensure good contact on the latest Intel and AMD platforms.

Mounting clips for a 2nd fan

While the AK500 only includes one fan, DeepCool has included an extra pair of fan clips for enthusiasts who want to add a second fan for maximum cooling performance.

The AK500 incorporates a matrix fin array, resembling a checkerboard pattern, designed to increase the static pressure of the airflow.

I will be testing DeepCool’s AK500 paired with the Intel i9-12900K processor installed in MSI’s z690 A PRO DDR4 motherboard and BeQuiet’s Silent Base 802 computer case. I’ve mentioned in previous reviews that due to the increased thermal density of the Intel 7 manufacturing process, as well as changes to the core and component layout, Alder Lake processors are more difficult to cool than the previous generation processors in the most processor intensive. workloads.

This means that the coolers that kept previous generation products like the i9-10900K nicely cool sometimes have trouble keeping Intel’s i9-12900K under Tj max (the maximum temperature before the CPU starts to heat up). strangle). Many coolers I tested failed to keep the i9-12900K under max TJ when power limits are removed in workloads like Cinebench and OCCT.

Please note that many factors other than the CPU cooler can influence your cooling performance. A system’s motherboard can particularly influence this, as there are boards on the market with CPU sockets that do not meet Intel’s specifications, which can cause warping or poor contact with the CPU. The case you use will also influence the cooling results.

Level 1 : These coolers are able to keep the i9-12900K below max TJ under most loads, with no power caps applied. I expect only the best liquid coolers to meet this standard.

Level 2: These coolers are capable of keeping the i9-12900K below the max TJ threshold with 200W CPU power limits enforced. I expect most liquid coolers and the best air coolers to meet this standard.

Level 3: These coolers are capable of keeping the i9-12900K under max TJ with 140W CPU power limits enforced.

To test the limits of a cooler’s heat dissipation capabilities, I run two main stress tests: Cinebench and OCCT for 10 minutes each. While that might be a short amount of time, it’s enough to push most coolers – both air and liquid – to their limits.

When stress testing in Cinebench, I run both with power limits removed and with a CPU power limit of 200W. Silent Base 802 computer from Be Quiet, only the best coolers can pass Cinebench tests when power limits are removed.

I don’t test OCCT without power limits because attempting to do so causes the CPU package power consumption to increase to over 270W and instant throttling with even the best AIO coolers. Instead, I test at 200W to give the coolers a chance to pass. I’ve included 140W results to give comparable data to a CPU that doesn’t use as much power, like AMD’s Ryzen 5800X or Intel’s i5-12600K. 95W test results are also included, for those interested in comparable results to low TDP processors such as AMD’s Ryzen 5600x or Intel’s i5-12400.