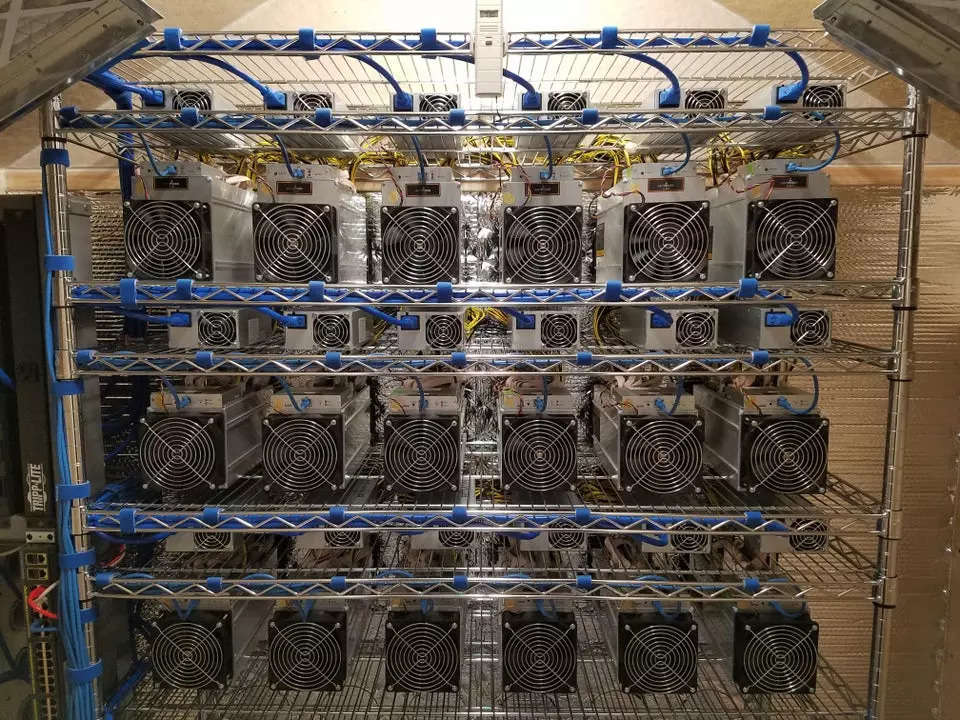 Cryptocurrencies are based on blockchains. In turn, blockchains need miners to verify transactions and maintain their integrity.

As a result, cryptocurrency mining has become infamous for spending a lot of coal-generated energy on virtual money (91 terawatts last year), driving up the prices of PC gaming hardware and exacerbating a chip shortage in a year the world was already struggling. a pandemic.

Some believe that mining has become so important over the past decade that it has become a nightmare for PC enthusiasts. It’s a convenient bogeyman to blame whenever the prices of computer components go up due to a shortage.
However, all is not bad.

Cryptocurrency mining also appears to have redeeming qualities. Among other reasons, mining is proving to be a bright spot that increases the demand for consumer office computer hardware, pushing for improved performance and energy efficiency that benefits everyone and keeps the segment alive for gamers. .

How cryptocurrency mining affected five components of the PC market

The first component of a PC to bear the brunt of cryptocurrency mining is the processor (CPU). A weak or powerful processor sets the pace for the rest of your desktop / laptop. Unfortunately, this is also the most important part for people who mine Bitcoin or Dogecoin. Intel and AMD have said separately that the semiconductor shortage may not subside until 2023. When it comes to graphics cards (GPUs), the newer ones are preferred because they will consume less power and display better visuals. – for your games, CAD applications, virtual reality simulations or metaverse meetings.

Coincidentally, a powerful GPU that doesn’t consume a lot of power is exactly what Monero and Ethereum miners want. This allows them to operate more but spend less, which allows them to increase their profit margins. In the battle between gamers and miners, chipmaker Nvidia recently implemented ‘anti-crypto mining’ measures – but frustrated gamers have been wishing for a ‘crypto crash’ since at least 2015.

Moverover, computer manufacturers operate with a rule of thumb of inserting as much RAM as possible for a given price, in order to ensure that the system runs faster. The prices for this part started to drop in 2019, but quickly increased soon after, amid the challenges that 2020 presented to the world.

Some cryptocurrencies are even mined using hard drive space, both hard drives and SSDs. The ever-growing storage capacity is eagerly tapped for “plots” of Chia coins by “farmers” who buy several petabytes of hard drives and hope to pay for this with their crypto profits. This leaves larger capacity drives beyond the reach of home users, who create and need to store more high-resolution photos and videos than ever before.

This practice of the “Farmers of Chia” has even led brands to reduce warranties on SSDs – generally known to have a longer lifespan than hard drives.

And finally, people who assemble their own computers for home use tend to use a power supply unit (PSU) that is designed for more wattage than expected. However, miners tend to buy most of the good units available through retail channels, leaving other users to twiddle their thumbs. In response to this and the rise in the price of metals, brands have released units one rung below the hobbyist quality and then one rung lower – who still manage to sell like hot cakes due to the shortage. good power supplies.

NOTE: All prices are in INR exclusive of tax, showing prices from offline retail channels (not prices of online offers).

The prices of PC components tend to fall as technology generally does between 2019 and 2020, but rise again with the rise in crypto from 2020-21. Note that these products are not very high-end today either. As computer hardware is being made obsolete by newer, better quality products, you would expect them all to be cheaper in 2021 than they were in 2018, sadly they are not.

In summary, prices inflated by demand from miners end up making economic sense only for miners – which is unfortunate for those on more reasonable budgets, whether a professional independent of all. the days, of a student or a player.

The mismatch of supply and demand

In a normal year – not a year passed by the pandemic – such prices for PC components could have meant an exodus to console games. However, even the latest game consoles such as Microsoft Xbox XSX and Sony PlayStation 5 are scarce.

This is one of the reasons why high-end gamers in India cite on forums for keeping PC components that are over five years old, like the GeForce GTX 1080 graphics card released in 2015. To illustrate how the market is doing. Upset over crypto mining, Desktop PC gamer Subhramani Iyer said: â€œI bought my GeForce GTX 1060 GPU in 2017 and sold it to an Ethereum miner in 2021, four years later without any guarantee – with a profit. “

Old-generation processors, graphics cards have traditionally sold at a discount to their introductory or purchase price. But over the past year, used CPUs / GPUs have sold for prices close to â€œnew in the boxâ€ prices. This distortion is not only due to supply problems, which have been almost constant for four years now. I blame the value of Ethereum which has gone from $ 200 to $ 4000 during this period.

Sovit Loomba, owner of Pronet Services, an IT services company in Bangalore, told Business Insider US

In the second-hand market, the supply bottleneck has led to price distortion, with prices doubling in some cases. Trends in online schooling and working from home, in particular, have driven up demand. This writer has seen a Centrino laptop made in 2004 so far valued at zero, recently selling for 10,000. On online platforms, new laptops that were previously priced at 16,000 yen are now priced at 30,000 yen and still manage to sell.

hen the cash value of the cryptocurrency is growing as fast as it is now – with Bitcoin’s value doubling this year to date – many who understand the technical details prefer to “mine” for them rather than buying the tokens on an exchange, in an attempt to get it “technically” for free. A lot of people, including well-funded companies, seem to have the same idea. Thus, the total computational power devoted to mining an encrypted coin, or the “hash rate” of the network continues to grow, forcing miners to keep upgrading their CPU / GPU / HDD to keep upgrading. reap fruit.

However, at today’s high crypto prices, miners are able to recoup their CPU / GPU / HDD investment in six to nine months, even at today’s excessively high levels. They factor this into their decision to purchase available inventory, further driving up component prices and crowding out ordinary PC users out of the market. Whether denying ordinary users will kill the PC itself as a long-term segment remains to be seen.

If you are tempted to start crypto mining from your home desk, remember that the biggest cost of mining is the electricity consumed. In addition, one would have to embark on a large-scale computing power to have any hope of making money from it. Simply put, miners as of today would need a huge amount of capital to purchase the equipment necessary for their installation. Mining with just one or two machines will simply leave you with a big electric bill, worn out PC components, and virtually no parts mined to show for the effort.

Those with a large group of computers should look for quick results, as Bitcoin and Ethereum are well on their way to moving away from energy-intensive methods of mining. As a miner, be prepared for the new regulations. At least a few regions around the world – particularly China and Malaysia – have banned or banned mining activity given its impact on power grids. To rehabilitate their reputation as energy hungry, bitcoin mining companies like Riot Blockchain have started trying to source ‘cleaner’ energy from renewable / green power plants.

The demand for minors and why they are now needed

Cryptocurrency â€œminingâ€ is essential to get new crypto â€œcoinsâ€ to circulate and to maintain the decentralized blockchain or ledger that is at the heart of securing transactions made with them. The large-scale computing power provided by “miners” was once hugely profitable for the people who ran them. Today, however, mining has become a hostage situation. The miners understand that they are unpopular and would like to quit, but cannot until they have paid off the loans that bought their expensive computer equipment. In the meantime, a reasonably strong mining community is still needed to maintain the integrity, so to speak, of the explosively growing cryptocurrency transactions.

We may just have to accept the situation until more efficient computer hardware is released in 2024. To their credit, analysis of hardware shipment data over the past year seems to indicate that miners aren’t even the biggest buyers – that title goes to large companies with their ever-expanding data centers.

Column: Why extended warranties on computers are a waste