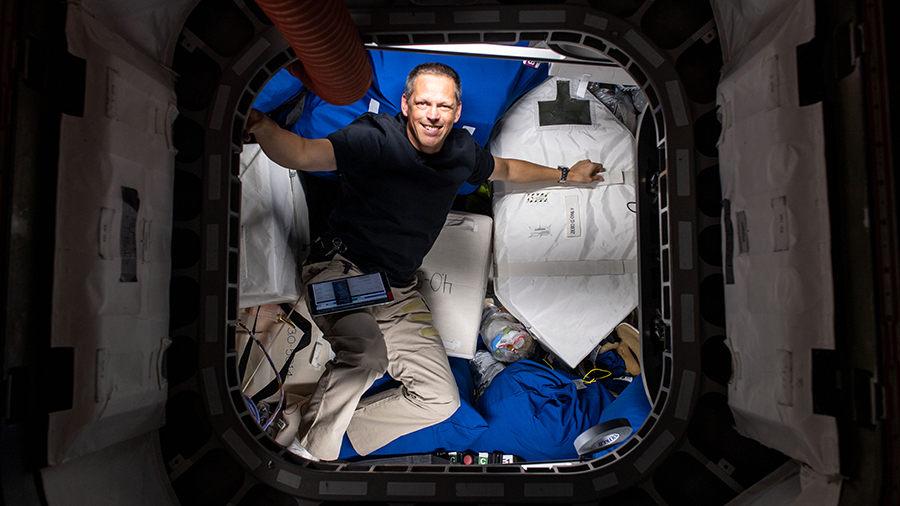 Space research equipment kept the Expedition 67 crew busy Friday as the four astronauts and three cosmonauts ignited free-flying robots, configured nanosatellites and replaced a fuel bottle inside a furnace . The septet also shared their day inside the International Space Station with observing Earth, working on a spacesuit helmet and packing cargo.

Astrobee’s robotic assistants flew autonomously inside the Kibo lab module today, streaming video of their activities to mission controllers on Earth. NASA flight engineer Bob Hines configured the cube-shaped Astrobees to test their ability to navigate and view Kibo’s interior on their own.

NASA flight engineer Kjell Lindgren checked out components of a US spacesuit helmet before continuing to pack Northrop Grumman’s Cygnus space freighter. Cristoforetti and Watkins both joined Lindgren at the end of the day as they loaded Cygnus with trash and discarded material ahead of his departure later this month.

In the Russian segment of the orbital laboratory, Commander Oleg Artemyev tested a set of nanosatellites before their future deployment. He also assisted Cristoforetti as she rode an exercise bike for a fitness assessment. Flight engineer Denis Matveev spent servicing a Russian oxygen generator on Friday while flight engineer Sergey Korsakov worked on configuration and computer maintenance tasks inside the multipurpose laboratory module of Nauka.

The International Space Station flight control team has decided to postpone the International Space Station’s first limited reboost by the Northrop Grumman Cygnus resupply vehicle from Saturday to Monday in order to refine the duration and magnitude of the activity following Thursday’s debris avoidance maneuver. The postponement will have no impact on station operations.

This Cygnus mission is the first to offer this enhanced capability as a standard service for NASA, following a test of the maneuver that was conducted in 2018 during Cygnus’ ninth resupply mission. Cygnus arrived at the orbital outpost in February and is expected to depart the space station later this month when it is desorbed to burn up safely in Earth’s atmosphere.

Learn more about the station’s activities by following the space station blog, @space station and @ISS_Research on Twitter, as well as the ISS Facebook and Instagram accounts.

Get weekly video highlights at: http://jscfeatures.jsc.nasa.gov/videoupdate/

Get the latest news from NASA every week. Subscribe here: www.nasa.gov/subscribe