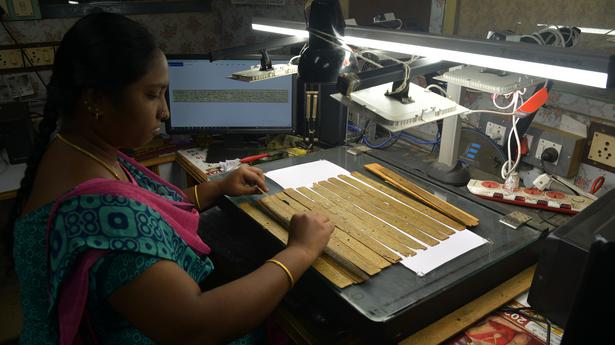 A repository of knowledge inside Thanjavur Palace

Nestled inside the historic Thanjavur Palace, the Sarasvati Mahal Library is an enviable repository of manuscripts and palm leaf/paper books in Tamil, Sanskrit, Marathi, Telugu, Hindi, English, French, German and Italian. It is considered one of the largest libraries of oriental manuscripts in the world and among the oldest libraries in Asia.

Ancient palm-leaf manuscripts and classics from rare collections could soon be read on a computer screen as the library’s digitization project wraps up later this year.

Over the past few years, technicians, with the help of linguistic pundits, have been busy capturing and preserving thousands of pages of ancient palm leaf/paper manuscripts and books over 100 years old from the library collections.

The colossal task began in May 2015 and should be completed by the end of the year. More than 36,000 ancient manuscripts and books, gathered in 23,34,519 frames, have been digitized. There are still 1.45 lakh of images, mostly comprising Sanskrit manuscripts, to be digitally captured and stored on hard drives.

“Except Sanskrit manuscripts, digitization of all manuscripts, palm leaf and paper, other languages ​​such as Tamil, Marathi and Telugu has been completed. Work was expected to be completed in October, but may undergo a slight time overrun. But we hope to complete by the end of this year,” says Dinesh Ponraj Oliver, District Collector and Library Manager. Some of the titles are also stored in microfiche form.

Digitization would add a new facet to the historical library and help it keep up with the changing times. The palace library collections are believed to have begun in the 16th century under the Nayak rulers of Thanjavur (1535-1675 CE) and expanded by the Marathas.

Although successive Maratha kings maintained the library, Raja Serfoji II (1798-1832), a bibliophile, was primarily responsible for its formatting. He is credited with acquiring several books and manuscripts. Today, it is a veritable treasure trove, with a collection of over 81,400 books and 47,500 palm-leaf and paper manuscripts. The Rajah’s impressive personal collection of 4,530 books is also part of the library.

The pundits of the language continue to lean on the manuscripts to bring them out as printed books as well. “The library has about 600 publications to its credit. We intend to bring out more,” says Oliver.

Efforts are also underway to decipher and publish some of the interesting documents among the Modi documents, which are ancient documents of Maratha kings spanning over a century of Thanjavur history. Modi is the abbreviated version of Marathi. Found in 1,342 bundles of fabric, the Modi documents are mostly court and administrative records. Today there are only a handful of scholars who can read the text. A set of 27 beams had been studied and released earlier.

In the preservation section, specially trained staff work to coat the manuscripts with lemongrass oil to prevent them from breaking. The process is done at regular intervals of two to three years to keep the leaves flexible. The library uses native insect repellent – a powdered mixture made from sweet flag ( vasambu in Tamil), black cumin, cinnamon bark, cloves and pepper. The mixture, tied in a cotton cloth with camphor, will act as an insect repellent for three to six months. Also, the well-lit and airy rooms of the palace are naturally conducive to the preservation of books, says S. Sudarshan, Librarian, Sarasvati Mahal Library.

The Library Museum is a unique treasure trove, with exhibits of palm leaf and paper manuscripts, printed books, drawings, maps, paintings and art collections. Here you will find one of the oldest manuscripts, Phalavati – a glossary on the Purva Mimamsa Sutras of Sage Jaimini, which is prominent in the six systems of Indian philosophy.

A bundle of palm fronds containing 24,000 verses of Valmiki Ramayana brings out the skill of the ancient scribes. Both sides of the sheets bear 30 lines of miniature Grantha letters, impossible to read with the naked eye. A pocket manuscript of the Bhagavad Gita, the Rig Veda with illustrated title sheets and the Mahabharata manuscripts, the Citra Ramayana, the Gaja (elephant) and Asva (horse) sastrams and the tables of human physiognomy by Charles Le Brun make part of the exhibits.

In recent years, the library has acquired an audiovisual room where a documentary on Thanjavur is screened every day. “We screen seven shows a day, but the documentary has become so popular that we often run extra shows,” says Sudarshan.