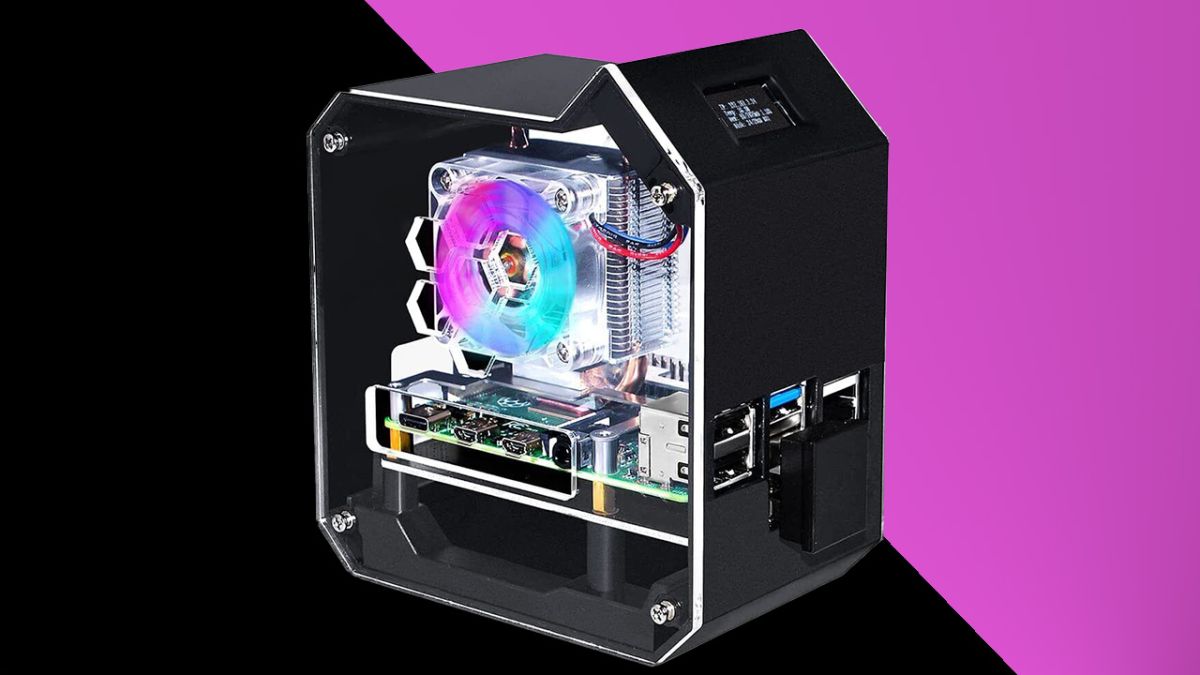 There’s more Pi than storage in the 3D-printed case, however, as the tower only accepts a single M.2 SSD (SATA, up to 2TB), connected via a USB bridge, while the Raspberry Pi 4 (opens in a new tab) the card itself is cooled by an ICE Tower HSF cooler, which looks like something that should be above any of the best CPUs for gaming (opens in a new tab) rather than a quad-core Arm chip.

The case comes with transparent side panels so you can admire the cooling fan in action, as well as a 0.96-inch 128 x 64 I2C OLED for vital information such as low CPU temperature. There’s a slot on the side to access the HDMI and USB Type-C power ports, but otherwise cable management is neat and tidy, although the card sits in what some will no doubt consider the bad position, with its USB and Ethernet ports facing the front of the case rather than being discreetly angled backwards.

This at least has the benefit of allowing USB devices to be plugged in more easily, but it does mean you could end up with an Ethernet cable sticking out of the front of your PC. A right-angle GPIO extension cable is provided, allowing you to connect a ribbon cable that can reach your Raspberry Pi HAT-based electronic projects, although none are included in the kit.

The kit is available with or without a genuine Raspberry Pi board, but the two options available on AliExpress are for the 4GB and 8GB models and almost sound like bargains considering how hard it is to find these boards recently. (opens in a new tab).

Although it’s billed as a NAS kit, the 52Pi mini-tower may be better at turning the Pi into a functional desktop – all that cooling means overclocking (opens in a new tab) should be easy, and the presence of the SSD should help with boot times and general responsiveness. It’s a very nice case and cooler combo worth seeing, which makes imperfections in its design harder to bear. The case is available on Amazon (opens in a new tab) as a barebones unit, or AliExpress (opens in a new tab) if you need a set of Pi boards.

SSDs are more reliable than HDDs, according to Backblaze data